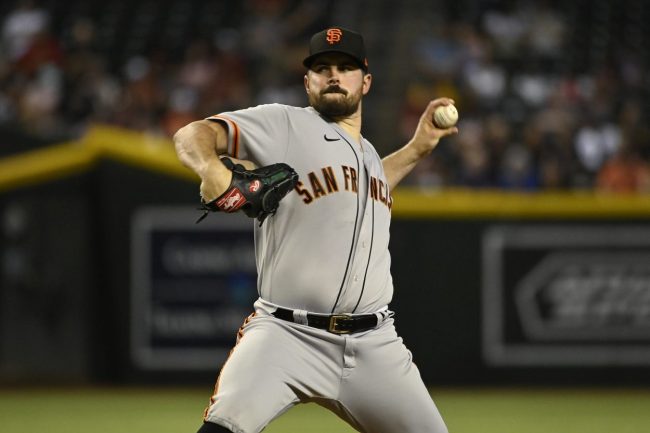 San Francisco Giants starting pitcher Carlos Rodon has been lights out from most of the the 2022 Major League Baseball season. Rodon is 8-6 with an ERA of just 3.18 and was a participant in his second-consecutive MLB All-Star Game just last week.

Rodon had a no good, very bad time of things however on Tuesday night against the Arizona Diamondbacks. The San Francisco ace made it through six innings, but he allowed five runs in the process, all of which were earned. The Giants went on to lose 7-3 and Rodon was credit with the loss.

But that wasn’t the worst of it. After returning to the dugout following the sixth inning, Rodon kicked a bat that was laying on the floor and fired it directly into the knee of teammate Thairo Estrada. Estrada immediately collapsed to the ground in pain. Thankfully the shortstop was able to remain in the game.

Things weren’t all bad for Rodon, however. In the bottom of the sixth inning, he made one of the most incredible field plays you’ll ever see to rob Diamondbacks right fielder Jake McCarthy of a hit.

A once in a million type of play pic.twitter.com/xx8D7qdMd6

McCarthy hammers a ground ball right back to the mound. Rodon  moved his leg to avoid being hit and the ball hits the mound, jumping between Rodon’s leg and right into his waiting glove. He then calmly turns and fires to first base for the out.

This might be the best ‘look what I’ve got play’ Ive ever seen https://t.co/ZsRXe0LMKF

Have to watch this a few times to really take it all in. 😅 https://t.co/OSlvyNsuHL

I’ve never seen anything like this in my life lmaoo https://t.co/Qqj3eQT0Sa

With between the legs moves like that, Rodon may have a second career with the And1 Mixtape Tour. While it was mostly a night to forget for the star pitcher, he’ll undoubtedly remember that play.