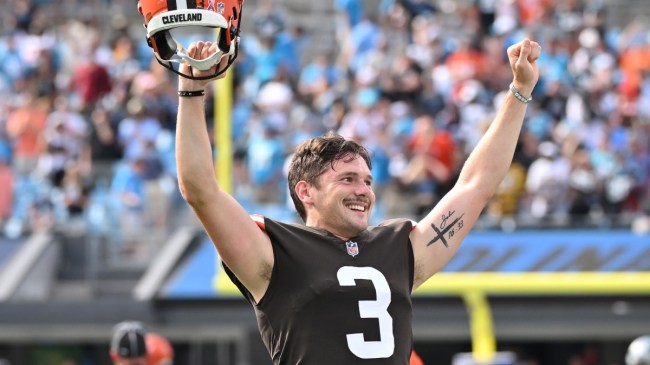 The theme of the first-round matchup of Cleveland and Carolina was Baker Mayfield going up against his former Browns teammates and coaches. But, rookie kicker Cade York stole the show.

Following a great Mayfield drive to give Carolina the lead, Cade York faced a 58-yard field goal to win the game.

The kick by York made Browns fans happy

It might be premature for a statue, but York took a big step forward for one today.

Buy the jerseys. Build the statue. Sound the horns. The #Browns have a franchise kicker and his name is Cade York.

According to a random guy on twitter, it was the longest Browns field goal since 1980.

Cade York made the longest Browns field goal since 1984. pic.twitter.com/fUqLxSQlKp

Of course, someone had to make a royal family joke.

After a 58-yard game-winning kick, he definitely has that dog in him.

It’s a big win for Cleveland, who needs every win they can get while Deshaun Watson serves his suspension .