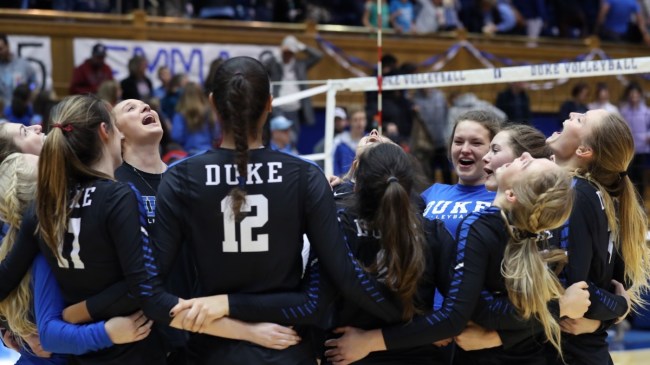 Duke University has responded to the results of BYU’s investigation of an alleged racial incident at a volleyball game. The alleged incident happen on August 26th on BYU’s Campus. Blue Devil Rachel Richardson alleged she repeatedly heard a racial slur when she was back to serve.

BYU says they cannot find evidence of the incident

BYU immediately apologized following the alleged incident coming to light and started an investigation into the incident. It even went as far as to ban a fan who they thought may have been the one to say the slur. But, today BYU said nothing happened.

Their statement reads in part

As part of our commitment to take any claims of racism seriously, BYU has completed its investigation into the allegation that racial heckling and slurs took place at the Duke vs. BYU women’s volleyball match on August 26. We reviewed all available video and audio recordings, including security footage and raw footage from all camera angles taken by BYUtv of the match, with broadcasting audio removed (to ensure that the noise from the stands could be heard more clearly). We also reached out to more than 50 individuals who attended the event: Duke athletic department personnel and student-athletes, BYU athletic department personnel and student-athletes, event security and management and fans who were in the arena that evening, including many of the fans in the on-court student section.

From our extensive review, we have not found any evidence to corroborate the allegation that fans engaged in racial heckling or uttered racial slurs at the event. As we stated earlier, we would not tolerate any conduct that would make a student-athlete feel unsafe. That is the reason for our immediate response and our thorough investigation.

BYU fan @eldermars was one of them and shared his praise for BYU.

BYU did everything they could, yet anything thought to be heard was misheard. Good job by the school and by the students both.

After the BYU statement, Duke Athletic Director Nina King released a statement of her own. But, it appears to call the veracity of the BYU investigation into question.

“The 18 members of the Duke University volleyball team are exceptionally strong women who represent themselves, their families, and Duke University with the utmost integrity. We unequivocally stand with and champion them, especially when their character is called into question. Duke Athletics believes in respect, equality, and inclusiveness, and we do not tolerate hate and bias.” #HateWontLiveHere

That is not exactly a rubber-stamp of Duke’s statement.

She knows what she heard and she has a right to stand on that.

But, some weren’t so supportive of the statement.

@CpaRtd was one of those.

Shameful non-response. BYU says your department cooperated in the investigation that found no evidence. Why not acknowledge the facts or just say she misheard something? Very sad times we live.