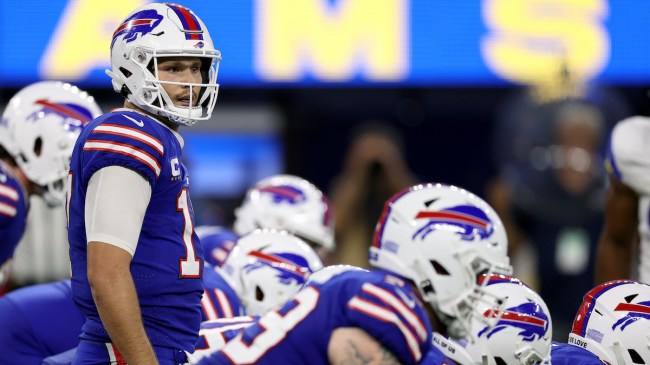 The Buffalo Bills are heavy favorites to win it all this season and a crazy stat is proving exactly why they’re deserving of the hype.

The Bills opened their season on Thursday night with a blowout win over the Los Angeles Rams. The first half was off to a slow start with star QB Josh Allen throwing two interceptions and rookie RB James Cook fumbling on his first NFL carry.

But the Bills came out hot in the second half and Allen found the endzone three more times. They closed out the game 31-10 and did it without recording a punt, an impressive feat to accomplish against the talented Rams defense.

Even more impressive, it marked the 3rd time the Bills had done so in their last 4 regular season games. A feat no other team has accomplished since individual punts began being tracked in 1939.

The Bills’ unreal no punt streak started last season in Week 16 against the New England Patriots. They scored on every single possession, aside from one turnover on downs, to defeat their fellow AFC East competitors 33-21.

Then they followed it up in Week 17 against the Atlanta Falcons with zero punts once again. The Bills rallied from a halftime deficit to win 29-15 and clinch a playoff berth.

Despite winning 27-10 over the New York Jets in Week 18, the streak came to an end as the Bills punted 7 times total.

However, they were back in peak form to kick off the 2022 NFL season. By not punting against the Rams, the Bills made NFL history. Since the league began tracking individual punts in 1939, no team had zero punts in 3 of the last 4 regular season games… until now.

It's one of the biggest coaching screw-ups in recent memory…https://t.co/FfyGFbn7Of

The Bills will look to continue adding to this wild statistic when they host the Tennessee Titans in Week 2 for Monday Night Football.

The Titans’ defense is no scarier than the Rams’ and the Bills’ offense looks unstoppable, so zero punts once again honestly wouldn’t be a surprise. It’d still be a very impressive feat though.