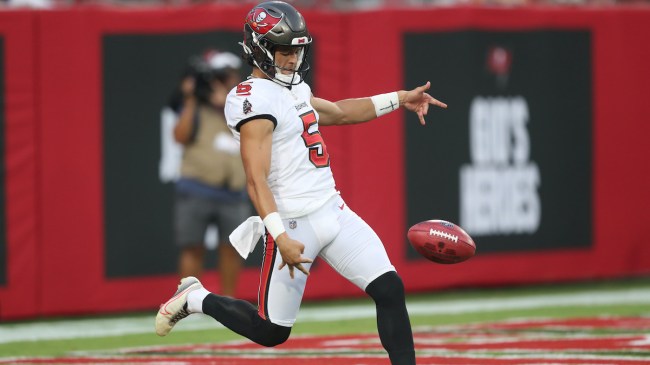 Buccaneers rookie Jake Camarda may have just had one of the most interesting first-career punts in NFL history.

The Tampa Bay Buccaneers traveled to AT&T Stadium to face the Dallas Cowboys for Sunday Night Football. With the Bucs attempting a field goal on each of their five drives, Camarda didn’t actually see any punting action in the first half.

However, the fourth-round draft pick out of Georgia would soon get his chance to shine at the beginning of the 3rd quarter. After the Bucs failed to move the chains with their first set of downs, Camarda skyrockets his first NFL punt. It went so high that it came into contact with the jumbotron at Jerry World.

The punt doesn’t just graze the bottom side of the scoreboard. It was still on an upward trajectory and hit the scoreboard with force. That’s pretty impressive hang time for the first punt of Camarda’s NFL career.

He isn’t the first punter to do it either. Tennessee Titans punter A.J. Trapasso nailed the giant video screen in 2009 after the stadium was first built. It forced the NFL to apply a do-over rule where the down would be replayed in such cases.

More recently, Dallas Cowboys punter Bryan Anger hit the jumbotron during the team’s wild-card game against the San Francisco 49ers last season. Jake Camarda is the first to hit it during a regular season game though.

This is the third time a punter has hit the center-hung digital board. It happened in the preseason in 2009; Bryan Anger hit it last year in the playoffs. Jake Camarda is the first to hit it in a regular season game.

The strangeness surrounding Camarda’s first career punt doesn’t stop there. Since his first punt hit the scoreboard, the established protocols gave him a second shot.

However, Cowboys’ KaVontae Turpin ran into him during that second attempt, resulting in a 5-yard penalty. It still wasn’t enough for the first down, so Camarda got a third chance at his first NFL punt.

It seems the third time’s a charm as he launched the ball 63-yards for a touchback. The play stood with no whistles coming and Camarda’s first career punt was finally in the books.

The Buccaneers’ rookie punter would be needed two more times in the 4th quarter, but neither punt came with the same buzz as his first.

The Bucs went on to defeat the Cowboys 19-3 in a relatively lackluster SNF match. The NFL might’ve found its next Punt God though and that’s worth getting excited about.