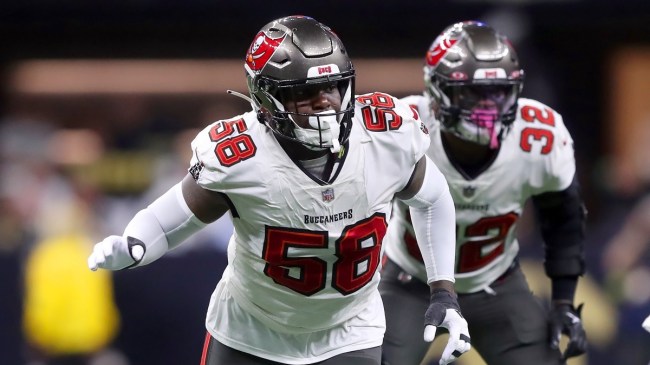 It’s been a terrible start for the Tampa Bay Buccaneers. The preseason Super Bowl contenders are now 3-5 after a disappointing 27-22 loss to the Ravens on Thursday Night Football. Things just haven’t been clicking for the club, as Tom Brady looks a little off while dealing with an absolute media circus surrounding his alleged marriage problems with wife Giselle Bundchen, fueled on by Antonio Brown. The weapons haven’t been healthy, and the defense seemingly hasn’t got a big stop all year.

This is a team that cannot afford any more injuries, as they’ve had a bunch of costly ones already. Unfortunately for the Bucs, it appears they will be without a superstar for a long time.

An Achilles injury is one of the worst that any athlete can suffer. the tendon that connects the calf to the heel is so crucial to any explosive movement. Sadly, it seems like superstar pass rusher Shaq Barrett may have torn his in the loss to the Ravens Thursday.

The fear is that Shaq Barrett tore his Achilles, per sources. An MRI will provide a definitive diagnosis. Just brutal.

This would be devastating news for the Buccaneers. Yes, they’re in a terrible division and could easily make the playoffs. But, this was a team designed to win now in the twilight of Tom Brady’s career. The pass rush isn’t super great even with Barrett, as teams can focus on him. Without him, it will be one of the worst pass-rushing units in the league. And, with the trade deadline approaching next Tuesday, they will have some big choices to make on whether it is wise to use draft capital to go get a pass rusher. They may end up not doing it and effectively punt on a season with Tom Brady at quarterback, a wild thought.

There should be definitive news on Barrett sometime Friday, but right now it does not sound good. Barrett has had 41.5 sacks over the past 3 1/2 seasons, making him one of the most prolific pass rushers in the league.