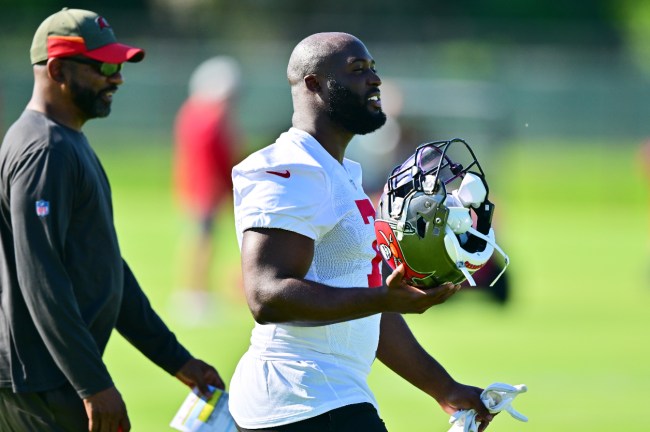 The Tampa Bay Buccaneers are aiming to make the Super Bowl with one more year of Tom Brady behind center. The hype is real, the buzz is there, and a deep playoff run could happen, even with Rob Gronkowski announcing his retirement from the NFL.

One player expected to do some heavy lifting is running back Leonard Fournette. But, Buccaneers coaches were reportedly concerned when Playoff Lenny showed up to mandatory minicamp at a stunning weight, according to Rick Stroud of The Tampa Bay Times.

“The last time we saw Leonard Fournette he was about a donut shy of 260. He certainly didn’t look like a guy who could play every down.”

Nonetheless, Stroud reports that the coaches weren’t thrilled with this development from their starting running back.

“Coaches were not happy, and that’s an understatement, when he didn’t participate in the OTAs, but then he shows up at the mandatory minicamp weighing damn near 260. And that’s not a good sign for a guy that you just spent a three-year contract on.”

It’s only July, so Fournette has some time to get into shape before the regular season begins. Again, here’s what Fournette said back in June.

#Bucs RB Leonard Fournette said that the fastest he’s ever ran was at 23 MPH.

He also spoke on dropping weight before training camp. He’s at 240-something right now and his ideal playing weight is 228-230. pic.twitter.com/kamCgv3Z6j

He wants to fix this, and all signs indicate he has been working on it.

Indeed, if Instagram is any sign, Lenny has been making a concerted effort to slim down in recent weeks. https://t.co/hKHQKg09qT

Buccaneers’ training camp begins on July 27, so let’s see how in shape Fournette looks at that point.