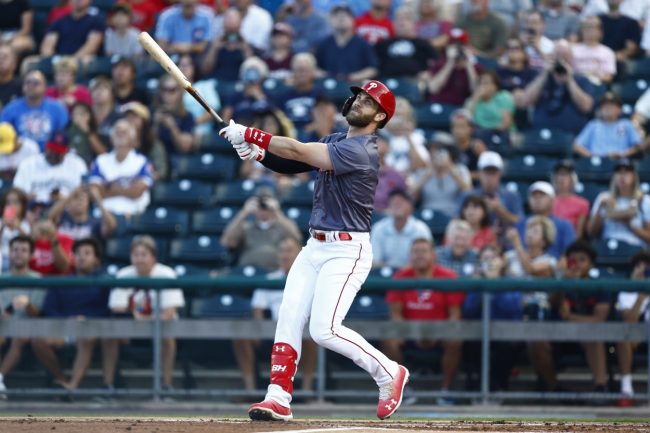 Reigning National League MVP Bryce Harper return to the cage to take batting practice late last week. The Philadelphia Phillies superstar has been out since late June due to a broken thumb suffered when he was hit by a pitch.

Harper’s batting practice session immediately had Phillies fans calling for his return to the lineup. The 29-year-old launched a number of deep home runs, including at least one into the upper deck at Citizens Bank Park.

Instead, Harper opted for a rehab stint. He began that stint with the Triple-A Lehigh Valley Ironpigs on Tuesday, and it didn’t disappoint.

The hype began over the weekend when Harper’s trip up the Pennsylvania turnpike was first announced.

In his first at-bat, the seven-time All-Star absolutely mashed a two-strike pitch to right field for a long home run. The Gwinnett Stripers (Atlanta’s Triple-A affiliate) even had fun with it.

Phillies prospect Bryce Harper goes deep to cut the Stripers lead 3-1. Admittedly, he looks like one to watch in the future.

Harper walked in each of his next three at-bats. But he wasn’t done putting on a show. In his final AB of the night, Harper absolutely obliterated a pitch to the opposite field for a three-run home run.

This time, Gwinnett appeared to be having slightly less fun with it.

Harper homers again to extend our deficit to 9-5.

Listen, if you only count the at-bats by people with less than two National League MVPs, we would be tied.

Phillies fans and players alike were ready for the star to immediately return to the big leagues.

"Bring him up. What are you doing out there? He's ready."

Rob Thomson not ruling out Harper for Friday. pic.twitter.com/yCSguwTJno

I mean why leave him in AAA for any more time? If he’s going to just DH then let him do this for the big club. https://t.co/Q808BlFSnX

Harper technically isn’t eligible to return until Friday against the Pittsburgh Pirates. But manager Rob Thomson didn’t rule him out for that series.

We're just wondering how this would even work with robot umps…https://t.co/uxx82iFSmc

Harper also aided a good cause with his performance. His jersey auctioned for $2,600 to local animal shelters. The IronPigs competed as IronMutts as part of a promotion night.