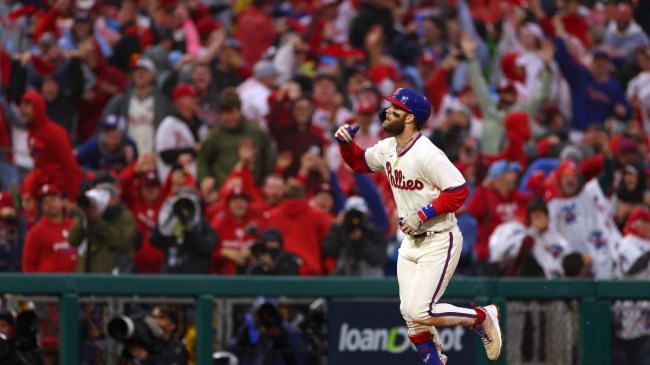 Bryce Harper has always faced sky-high expectations. The Phillies’ outfielder was being flown around the country to travel tournaments as a pre-teen, and he was on the cover of Sports Illustrated at just 16 years old. And even though he won an MVP as a Washington National, the team that drafted him first overall in 2010, many have derided him for being overrated.

Still, when he hit free agency before the 2019 season, he was the most sought-after free agent in the sport’s history. And, the contract proved that when he signed an 13-year, 330 million dollar deal.

He won the NL MVP last year, but battled injuries this year. However, in this postseason, Harper has paid off the entirety of the contract in the eyes of Philadelphia fans and one swing of the bat cemented that forever.

Harper has been red-hot for the Phillies in the postseason, and was hitting .400 coming into Sunday’s game 5 of the NLCS, with Philadelphia leading the series 3-1.

But, the at-bat that will be remembered forever came in game 5. After Philadelphia gave up two runs in the top of the 7th in a rainstorm to go down 3-2, Harper came up with a runner on in the 8th inning with a chance to make history. That’s exactly what he did.

OMG BRYCE HARPER!!! WOW!!! THE SWING OF HIS LIFE!!! pic.twitter.com/9UWmROAuNV

That’s the swing of his life, and the Phillies hung on for a 4-3 win. They’ll head to the World Series for the first time since back-to-back trips in 2008 and 2009.

Bryce’s reaction to his home run is so wholesome, too.

He was named series MVP as well.

The Phillies will await the winner of the Astros-Yankees series in the World Series. As of writing this, Houston leads the series 3-0 and has not lost this postseason.