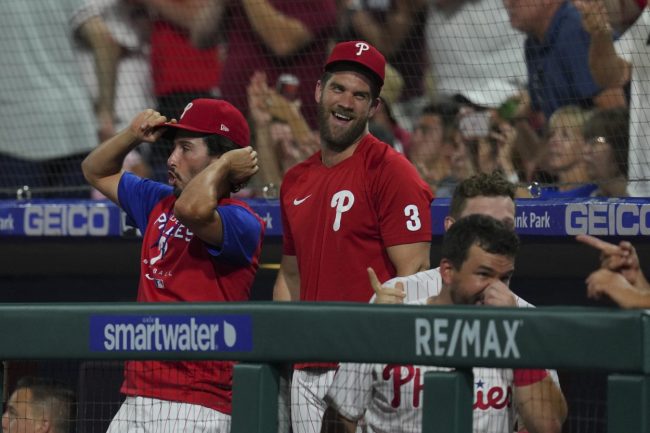 Bryce Harper has been on the injured list for the Philadelphia Phillies since breaking his thumb on an errant pitch from San Diego Padres starter Blake Snell on June 25.

Since then, the Phillies are a surprising 27-17 and currently sit in the National League’s second wild card spot, just ahead of those very same Padres.

But the Phillies offense has been streaky in Harper’s absence. As the team makes a stretch run, it’ll need more consistent production from its lineup to keep pace. Thankfully, it appears help is on the way.

Harper took batting practice on Friday afternoon and more than impressed. The reigning National League MVP reportedly hit a number of home runs, including one absolute bomb that cleared the second deck at Citizens Bank Park.

Phillies fans caught wind of the video on Twitter and immediately began to lose their minds.

Second deck dingers but yeah get him on that rehab assignment https://t.co/5TxwecMHnB

Look at these beefy bombs https://t.co/Vy8JMy5e1c

This team isn’t losing once he comes back bro I can’t wait.

Just stay afloat for 2 more weeks. That’s it. Then help is on the way https://t.co/YNSGpWxUEp

Harper was yet again at an MVP-caliber level prior to the injury. He led the team in batting average (.318), home runs (15), RBIs (48) and a number of other statistical categories in just 64 games played.

Philadelphia hosts the NL East-leading New York Mets for a four-game series over the weekend. Mets aces Jacob DeGrom and Max Scherzer are not scheduled to pitch in that series. Things just continue to look up for Phillies fans.