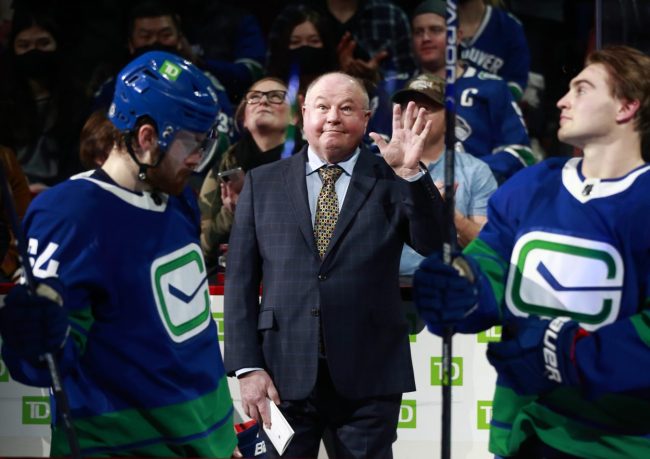 Boudreau, who won the Jack Adams Trophy presented to the NHL’s best head coach in 2008, even has a list of his top-five favorite wrestlers.

Kevin Owens, a current WWE wrester and Quebec native, sits No. 2 that list behind fellow Canadian Bret Hart. Owens, a Quebec native, was in Montreal on Saturday attending the 2022 NHL Draft. As was Boudreau on behalf of the Canucks. That led to this incredible moment.

We had a surprise in store for Bruce Boudreau 😈

Watching Boudreau turn into a genuine kid again and get all red faced was absolutely hilarious. But Owens also could not have been any more gracious. While he plays a bad guy on WWE television, it’s clear that Owens (real name Kevin Steen) is quite the good sport.

And Owens didn’t just sneak in, say hello, and leave. The segment between he and Boudreau went on a for a couple of minutes as the veteran behind the NHL bench continued to be at a loss for words. Hockey fans across the internet absolutely loved the interaction.

Idk shit about wrestling but this is actually cute lmao Boudreau is beaming https://t.co/EuUk1mYALy

This is so heartwarming 🥺❤️ @FightOwensFight lots of love! https://t.co/hf878nbBal

This is beyond adorable. Boudreau is the best. https://t.co/vDbnv17YUp

This past season was Boudreau’s first in Vancouver and Canucks took a huge step forward, just narrowly missing out on the NHL playoffs and scoring 92 points after scoring just 50 the season prior. Who knows, maybe the interaction with Owens will be just the inspiration that Boudreau needs to get his team over the hump.

And even if it’s not, it leaves NHL fans with an all-time great NHL Draft memory.