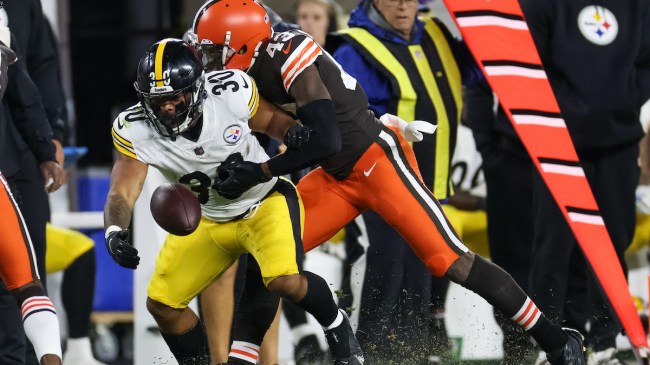 Thursday Night Football between the Pittsburgh Steelers and Cleveland Browns may not have had the same hype as Week 2’s Chiefs-Chargers matchup, but boy did it deliver some memorable moments.

The game was fairly even in the first half with the big highlight coming from Steelers’ George Pickens. The rookie WR delivered a potential catch of the year with his best Odell Beckham Jr. impression. The second half of the game will be remembered for a very different reason though.

The Browns took a two-score lead early in the 4th quarter before the Steelers cut it down to 6 with less than 2 minutes to go. Pittsburgh got the ball back for one final play which some sports bettors are now wishing never happened.

The Steelers attempted a series of laterals from their own 12-yard line in hopes of a game-winning touchdown. Unfortunately, it went horribly awry with a fumble and the Browns recovering it in the endzone for a touchdown.

While that late score didn’t affect the final result, it had serious implications on several different sports bets.

Play-by-play announcer Al Michaels immediately noted how the late touchdown “may be meaningful to some of you.” Of course, he was referring to the multitude of sports bettors who had just witnessed an all-time bad beat.

The over/under for total scoring in the matchup opened at 40.5 earlier this week. The bet would’ve hit at 23-17 if not for the final play of the game.

The defensive touchdown also ruined any teasers placed on the Steelers for another all-time bad beat. The final score ended 29-17, meaning even an alternate spread of Steelers +11.5 wasn’t enough.

It gets even worse for those with the Chase Claypool prop bet of 35.5 total receiving yards. He entered the last play with 41 yards and came out with just 35 yards in the end. Despite not catching the initial pass nor fumbling the ball, Claypool was credited -6 receiving yards and the bet missed by 0.5 yards.

He entered the final play with 41 yards

He was credited with -6 receiving yards on the play to finish with 35 yards pic.twitter.com/JLCOGrCvyw

Another contender for the worst bad beat of the night was someone playing DraftKings fantasy football. A potential 1st place for $239,000 vanished with the final play of the game and he ended up netting only $750 in 42nd place.

It wasn’t all bad for sports bettors though. Those who backed Pat McAfee’s Super Boost—consisting of Steelers +7.5, Najee Harris 1+ TDs, and Nick Chubb 1+ TDs—received a refund from FanDuel Sportsbook.

Well, that didn't go as planned…

After that insane finish on #TNF, we've decided to refund all customers who backed @PatMcAfeeShow's Super Boost tonight 💰

(Refunds will be credited as free bets over the next 24 hours) pic.twitter.com/C2N3bI8wgx

Even then some fans are done betting on the Steelers after what happened, and understandably so. Thursday Night Football somehow delivered a multitude of all-time bad beats as a result of one meaningless defensive touchdown.

Hopefully, bettors will have better luck during Sunday’s slate of games.