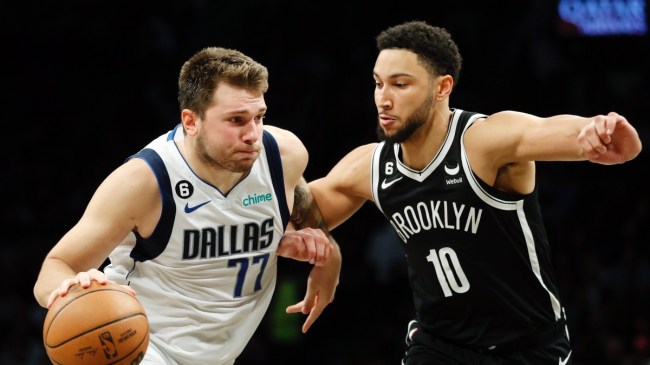 It’s been a poor start for the Brooklyn Nets. After Thursday’s overtime loss to the Dallas Mavericks, the team is now 1-4 and looks terrible. Kevin Durant is still one of the league’s top players, and Kyrie Irving has been okay. But, Ben Simmons has been horrific and a a beat-up supporting cast hasn’t given much help.

It’s easy to make fun of Brooklyn fans, too. It was one thing when the team was in New Jersey. But, New York is a Knicks town, and the atmosphere at Barclays Arena is incredibly sanitized But, Thursday night was the exception as an unfortunate incident occurred near the end of the game.

After the Nets rallied late in regulation to send it to overtime, the Mavericks came out in the overtime period and executed with precision to build a nine-point lead with 1:40 left. And, one fan had enough. Watch closely in the top right corner, where Doncic is standing.

Five games in and Nets fans have seen enough pic.twitter.com/JyOrPPllL8

Yikes. Not a good look for the fan base. They had to stop the game for the mess to be cleaned on the court. Doncic didnt’ seemed fazed, though. Then again, nothing fazed him all game as he had 41 points, 14 assists and 11 rebounds in the 129-125 win.

That being said, there aren’t a lot of Nets fans to begin with, so it won’t be hard to figure out who did it.

Brooklyn Nets fans are jerks. Both of them.

The Nets host the Pacers Saturday night as they look to improve to 2-4.