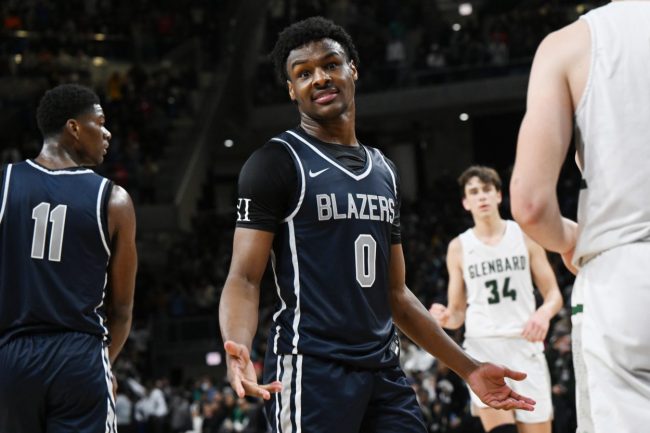 Bronny James can’t seem to escape the news in recent days. Though it comes as no real surprise at the eldest son of NBA superstar LeBron James is quite the basketball player in his own right.

First, the James made headlines by throwing down an absolute hammer of poster dunk on Monday that had his dad and the rest of basketball Twitter completely stunned. Then just hours later he was back in the news. Though this time it was not of his own doing.

FOX Sports personality Skip Bayless seemingly came after the teenager with a bit of criticism over his highlight real play.

Hey, Bronny … impressive. But your dad would've dunked it left-handed. You sure got away with it, though.

Bayless later walked back those comments on his morning show “Undisputed.” The controversial host said he didn’t intend the tweet as a criticism and just wanted to prepared the younger James for life in the spotlight.

With that in the rear view mirror, James can get back to focusing on basketball where he’s ranked as the 38th-best player in the country for the high school class of 2023 by On3 Sports. James has no shortage of suitors, but one school leads the pack according to national recruiting analyst Jamie Shaw.

INTEL: One school has emerged as the leader to land Bronny James

That school is reportedly the Oregon Ducks. The Ducks make sense for a number of reasons for James, which Shaw goes into further detail to explain.

“There are many ties between the James family and Oregon. The connections mostly center around Nike. Oregon is the flagship school for the Nike brand. LeBron James and Nike have done business together with SpringHill Company. And LeBron has signed a lifetime contract with Nike as an apparel brand.

There is also a tie between Bronny James and Mookie Cook. The pair were travel teammates with the North Coast Blue Chips team in middle school. Cook also spent his summer playing a young LeBron James in a SpringHill Company-produced movie called Shooting Stars.”

Cook is a four-star forward from Oregon who already pledged his commitment to coach Dana Altman and the Ducks. Shaw also listed USC and Ohio State as potential landing spots. But he then logged a prediction for James to commit to Oregon.

Donovan Mitchell could be on the move to one of two teams that NOBODY saw coming. https://t.co/ngfXPbykt1

Whoever lands the 6-foot-3 guard is getting an elite athlete athlete who could just be a program-changing player.