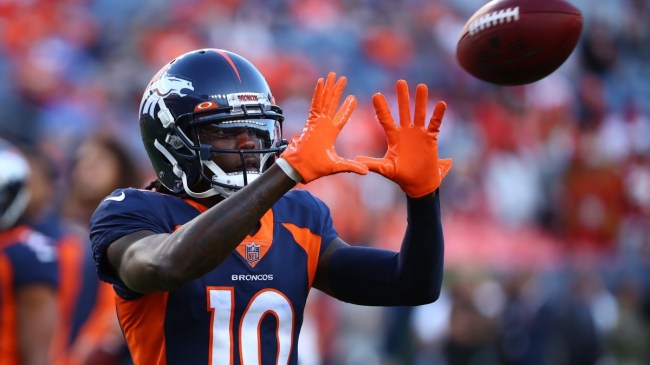 Shannon Sharpe’s job is to give his opinion. Skip Bayless’s co-host on First Take, Sharpe has made a name for himself with passionate takes.

He had a passionate opinion on Sunday about Denver Broncos Receiver Jerry Jeudy after Jeudy had a key drop.

Juedy does all this route running in the off season and can’t catch a FCKING pass.

Unfortunately for Shannon Sharpe, Jeudy fired back in a now-deleted tweet.

This comeback is somewhere between absolute savage and elementary school playground.

I have no clue how Shannon can even respond to that, but I’m sure we will find out on Monday’s First Take.

Everyone is reacting to this spat

There is a sense that Jeudy deleted it because he forgot who he was talking to.

Jerry Jeudy Deleted that clapback at Shannon Sharpe forgetting Shannon a 3 Time SB Champ and one of the greatest pass catching tight ends all time💀💀💀 pic.twitter.com/FJvg9J6kUI

This Broncos fan thinks Jeudy should just shut up and put his head down and get better.

Jeudy wishes he had a fraction of Shannon Sharpe’s talent. Maybe keep your head down and keep working rather than engage in a Twitter spat with one of the top 10 players in franchise history?

I intended to agree with this one. I was really high on Jeudy coming out of Alabama, but he has definitely disappointed since being drafted in 2020.

So Jerry Jeudy who has proven nothing in the NFL other than he can’t catch the football and that he’s soft and makes mental errors left and right is talking trash to Shannon Sharpe? Somebody needs to set his ass straight.

First Take on Monday is going to be must-watch.