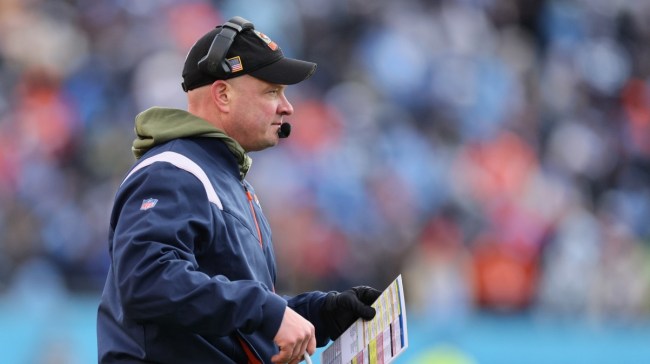 The Denver Broncos’ offense has been putrid this year. Expectations were high for the Broncos, especially after the acquisition of Russell Wilson in the offseason. With weapons at wide receiver like Jerry Jeudy, Cortland Sutton and others, it was easy to expect them to be an explosive offense.

But, they rank dead last in points per game at 14.6, and it’s just never clicked. They’ve had injuries, such as a season-ender for running back Javonte Williams. But, every team has injuries in the NFL. They’ve just simply been bad, and a lot of the blame falls on Wilson, who has been terrible.

But, first-year coach Nathaniel Hackett, who has also been under fire, is making a key change on offense.

Quarterback coach Klint Kubiak will be the play-caller

Somehow, the Broncos still have playoff hopes at 3-6. And, they’re not giving up on the season just yet.

Credit to Tom Pelissero for that.

#Broncos coach Nathaniel Hackett is turning over play-calling duties to QB coach Klint Kubiak, per sources — a bold move to try to spark the offense and Russell Wilson starting today against the #Raiders. https://t.co/4ZGAiJbUfm

Here’s an excerpt from the article.

Hackett is turning over play-calling duties to quarterbacks coach Klint Kubiak, who will send in the calls to Russell Wilson starting with Sunday’s home game against the Raiders, per sources.

Hackett informed players of his decision during Saturday night’s team meeting, telling them in an impassioned and enthusiastic speech that he’s willing do whatever it takes to help the team get better after a disappointing 3-6 start.

Sources say Hackett chose the 35-year-old Kubiak because he has called plays before — the Vikings had one of the NFL’s most explosive offenses with Kubiak as offensive coordinator in 2021 — and will give Wilson a different view from Kubiak’s seat up in the booth. It’ll remain a collaborative process, with Hackett and offensive coordinator Justin Outten also heavily involved in the game plan and on the headset during the game, while Kubiak calls the plays and becomes the voice in the ear of Wilson, with whom he has forged a close relationship.

Denver needs a spark. They will play at home against the Broncos Sunday at 4PM ET