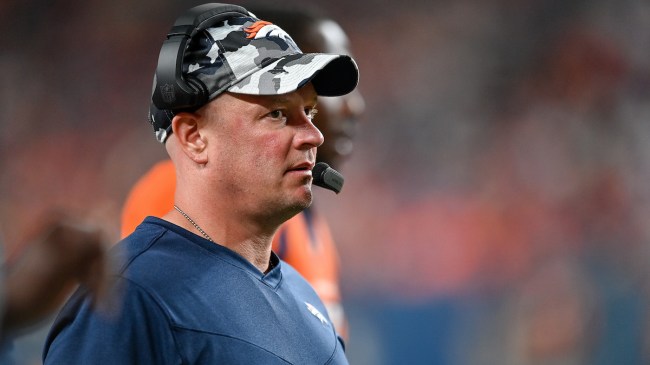 $242 million just to take the ball out of Russel Wilson’s hands and instead attempt a 64-yard field goal. That’s the decision Hackett made on 4th and 5 when trailing by 1 to the Seattle Seahawks during Monday Night Football.

Despite having three timeouts, over a minute on the clock, and Super Bowl-winning QB under center, kicker Brandon McManus was sent out to tie the record for 2nd longest field goal and unsurprisingly missed left.

Hackett defended the decision following the loss, but the entire world has since let him know how baffling it was. In less than 24 hours, he’s already backtracking and finally admitting what everyone said from the start: “We definitely should’ve gone for it.”

Addressing his decision to attempt a game-winning 64-yard FG last night, Broncos’ HC Nathaniel Hackett just told reporters, “Looking back at it, we definitely should've gone for it.”

It’s good news for Broncos fans that Hackett is willing to acknowledge his mistakes. It might’ve taken the entire NFL world to rip him to shreds, but he eventually came to the correct conclusion… somewhat (h/t Michael David Smith of Pro Football Talk).

“Looking back at it, we definitely should’ve gone for it. Just one of those things, you look back at it and say, ‘Of course we should go for it. We missed the field goal.’ But in that situation we had a plan. We knew 46 was the mark.”

The fact Hackett frames his admission as ‘hindsight is 20-20’ gives some reason for concern. Everyone, including a mind-blown Payton Manning, knew what the Broncos should’ve done right as it was happening—let Russ cook!

The fact that Nathaniel Hackett still doesn’t truly see that is worrisome. It’s like he only thinks it was a poor choice because McManus missed. When in reality even if the kick was good, the plan still doesn’t just suddenly become right.

With the Chiefs, Chargers, and Raiders all in the AFC West, the Broncos and Hackett can’t afford to botch opportunities like such again if they hope to reach the playoffs.