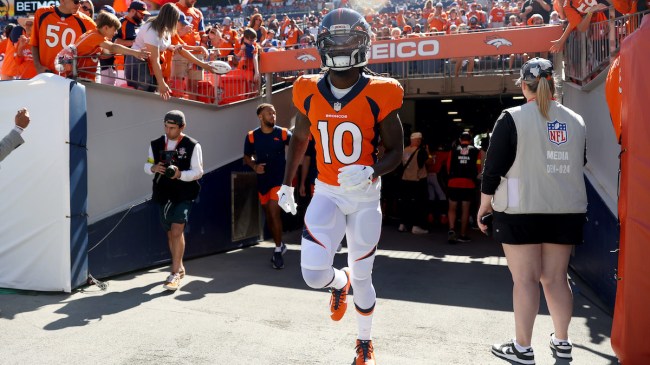 The Denver Broncos came out with the win in their home opener against the Houston Texans, but it wasn’t pretty—even costing them two superstars in the process.

Wide receiver Jerry Jeudy hurt his shoulder, later confirmed to be a rib injury, when landing awkwardly on a pass-catching attempt in the 1st quarter. Cornerback Pat Surtain II soon followed with an apparent shoulder injury midway through the 2nd quarter and both were officially ruled out from the game.

Luckily for Broncos Country, it appears the injuries are not too serious. NFL Network’s Ian Rapoport reported that both Jeudy and Surtain II are considered day-to-day after further testing on Monday.

#Broncos WR Jerry Jeudy is also considered day-to-day after dealing with a chest/sternum injury. So, all around, pretty good news for Denver. https://t.co/EiLAICy1mi

It’s pretty optimistic news considering both players left the field on Sunday and did not return. It’s also much-needed news for the Broncos.

Jeudy led the Broncos with 102 yards and 1 touchdown on 4 receptions against the Seahawks. However, his injury left Courtland Sutton and a string of backups as Russell Wilson’s targets against the Texans.

On the defensive side, Surtain II is the team’s best player in coverage. He held DK Metcalf to just 36 yards in the season opener and often matches up against the opponent’s best receiver.

Losing either Jeudy or Surtain II for an extended period would be a brutal blow. Thankfully, it appears that won’t be the case.

"We're crossing our fingers" that they can play this weekend vs. San Francisco, Hackett said.

The Broncos already have enough issues. Nathaniel Hackett continues to find new ways to show off his ineptitude as a head coach. Russell Wilson isn’t proving to be any better after the baffling decision to use the Seahawks’ hand signal against them.

At least, Broncos Country can rest easy knowing both Jerry Jeudy and Pat Surtain II could recover in time for Week 3 against the San Francisco 49ers. Although a clearer picture of their availability likely won’t come until closer to the weekend.