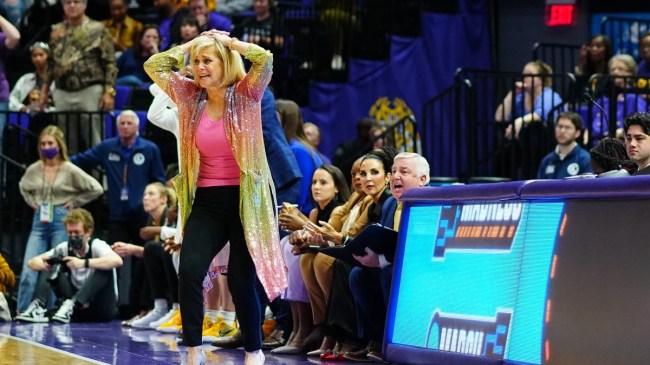 The Brittney Griner saga has been ongoing for quite some time. The former Baylor star and current WNBA superstar is one of the best women’s hoopers on the planet. But, earlier in the year, she was arrested entering Russia to play in their league when she was caught with hashish oil, a marijuana derivative.

Griner has since been sentenced to nine years in Russian prison, sparking domestic and international outrage. Some think she is a political prisoner, being kept in Russia as consequence for the United States’ sharp opposition to the Russian invasion of Ukraine. Nearly everyone in sports has sent out their well-wishes for her 6-foot-8 center. But, her college coach, former Baylor coach and current LSU coach, Kim Mulkey, is not one of those.

Mulkey has nothing nice to say about Griner

Mulkey was asked about her former star that gave her a national champion in 2012. Her response was as cold as can be.

“I wanted to get your thoughts on the Britney Griner situation, I don’t think I’ve seen anything from you on that.”

That is the opposite of empathy.

Of course, the rumors around Kim Mulkey and her treatment of LGBTQ+ players have been around for a while.

A reminder that while Kim Mulkey was coaching Baylor, she urged Brittney Griner to hide her sexuality during Griner's 4 years at Baylor
Mulkey then tried to get ESPN reporter Kate Fagan fired from the for breaking that story.
What an exceptional piece of shit human https://t.co/AjzJVYgr8b

the the sports world reacts

People were pretty mad at Kim Mulkey for her comments during the Baylor sexual assault scandal. You can judge those comments against the ones she made today about Griner for yourself.

Kim Mulkey will tolerate Brittney Griner if she can lead Baylor to an epic 40-0 season. Support her in her greatest time of need? Nah. Brittney ain’t even human to her. https://t.co/xX26NTTYY4

Queen Egbo, who played for Mulkey at Baylor, had some pretty sharp words for her former coach.

A player that built Baylor, 2 national titles, & a 40-0 record. Yet her former coach refuses to say anything or simply just show any kind of support. Keep that in mind when you’re choosing schools.

Bakari Sellers did not mince words either.

She is who we thought she was…🤷🏾‍♂️ It’s more than sad. She didn’t even go “thoughts and prayers.”

This is certainly part of a trend for Mulkey.

I see that for the 214th consecutive week Kim Mulkey has won the prestigious “Kim Mulkey Worst Person in American Sports Award, presented by Kim Mulkey”

Needless to say, a lot of people will be rooting against LSU this year.