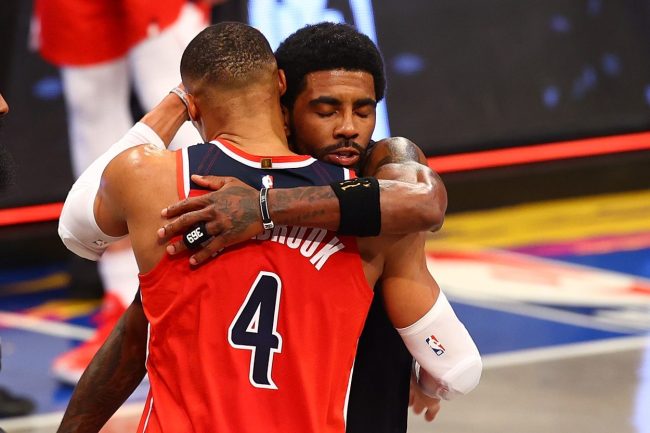 Admit it. You thought the Kyrie Irving-Brooklyn Nets saga was finally put to bed.

After all, Irving did finally agree to opt in to the final year of his contract. Despite reportedly asking out of Brooklyn and just generally causing a headache for the organization and its fans, Irving and the Nets now seem to be on the same page.

Or so we thought.

ESPN reported Brian Windhorst went on the network’s morning show, “Get Up!” on Wednesday and dropped this little tidbit.

“If the Nets don’t get to a place with Kyrie Irving where they think that things will improve, I think they can revisit this.”

Brian Windhorst isn’t ruling out a Kyrie for Russell Westbrook trade in the future. pic.twitter.com/a2IUq5hsGf

Windhorst went on to say that Brooklyn was unhappy with Irving’s behavior in the past. Not only with his vaccine stance, but also the way he treated people within the organization.

"[The Nets' front office] made it clear the status quo from last season is not acceptable. And it wasn't just about the vaccine mandate, it was about the way Kyrie Irving treated his teammates … his coaches."

According to Windhorst, if Irving doesn’t change his behavior he may yet be dealt to another team. And not just any team. Windhorst believes that the Nets could move Irving to the Los Angeles Lakers with Russell Westbrook coming the other way.

Bullshit 😂. The Nets are definitely frustrated with Kyrie but why would they want Westbrook in return?? https://t.co/yceIpw2W2w

Why y’all even entertain this dumb shit? Lmao why would the nets want Westbrook? So many questions https://t.co/8LEw9NWV1r

What GM in their right mind trading Kyrie for Westbrook 😂 this dude outta his mind https://t.co/szwjvSJU30

Please stop man. Y’all got caught holding the bag and now trying to save face for yourself and woj. Shams got y’all. https://t.co/DIzyWVTwfM

Irving and Westbrook have both been in the news through the still-young NBA offseason. So another crazy twist to the storyline wouldn’t really surprise anyone. But Windhorst’s credibility seems to take another hit with each new turn.