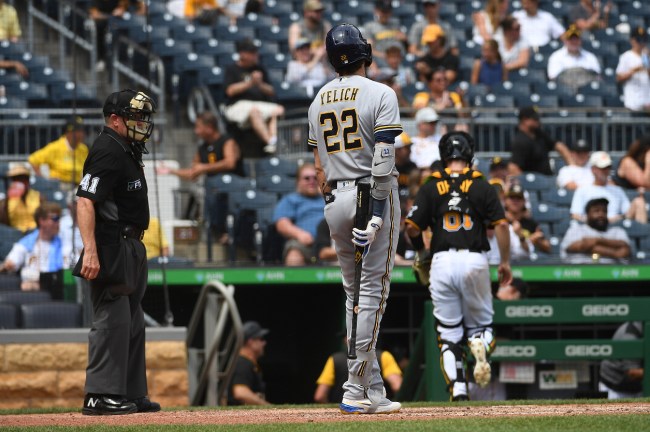 The Milwaukee Brewers aren’t exactly rebuilding. So, their decision to trade away All-Star closer Josh Hader to the San Diego Padres was a little bit of a surprise.

Nonetheless, they still have a clear shot at winning the National League Central. On the other hand, the past few days have not been kind to the Brewers.

On Thursday, the Pirates walked it off against the Brewers courtesy of a wild pitch by Matt Bush in the 10th inning.

Walk-off wild pitch and the Pirates win it!! pic.twitter.com/S6zVAaOecY

That is a brutal way to lose a game. What makes it worse is that the Pirates completed a sweep of the Brewers, and Milwaukee blew a 10th-inning lead.

The Milwaukee #Brewers blow a 10th inning lead and are swept by the #Pirates, their second walk-off loss in 24 hours.
Yes, they badly miss four-time All-Star closer Josh Hader, who was traded to the San Diego Padres, believing they could win the NL Central without him.
Maybe not

That is just an awful turn of events over the past few days, and the St. Louis Cardinals are right behind them in the NL Central standings.

MLB fans aren’t sure what the Brewers are doing.

If only they had the best closer in the game, oh wait https://t.co/DtU88X3jrd

The brewers are so stupid for this. The Cardinals are easily gonna win the division now. https://t.co/Z2mG4BYc1v

This is a joke at this point. It’s really hard to cheer for team that keeps choking. https://t.co/l6Cni844bF

I'm starting to think impulsively trading your All-Star closer at the deadline while leading the division is a bad idea. #STLCards https://t.co/muliPitEN0

The Brewers’ front office after trading away Josh Hader and immediately getting swept by the Pirates: pic.twitter.com/S8001jG28v

Brewers fans, specifically, aren’t happy about this turn of events.

Upper management deserves everything that has taken place and more. https://t.co/oGrxEKRzwJ

I liked it better when the Brewers went like 24-0 against the Pirates and never had to worry about losing to them. https://t.co/RM0ldOONTj

but when you factor in that sweet, sweet payroll flexibility, in many ways we're all winners in milwaukee! https://t.co/xpkQa1yb4V

a new low for this poverty organization https://t.co/T9Nq5SZkaM

This franchise is confusing everybody, and things might continue to get worse for them. They play a three-game series against the Cincinnati Reds, which should be easy. But, after that, they face the following teams, in order:

That hurts, and it isn’t encouraging whatsoever.