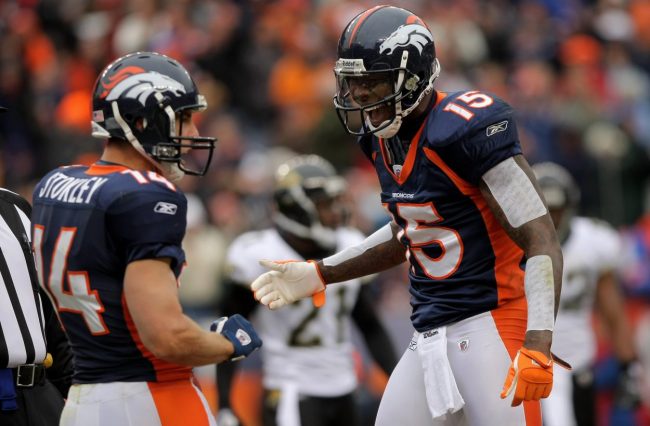 Six-time NFL Pro Bowl selection Brandon Marshall made his name in the NFL with the Denver Broncos. The Hawaii product thrived under head coach Mike Shanahan, making his first Pro Bowl under the two-time Super Bowl winner in 2008.

Now Marshall is a host of the show “I Am Athlete” which describes itself as tackling “important and controversial topics around sports, culture, society and life.”

He was in San Francisco on Friday to take in San Francisco 49ers practice and speak with Shanahan’s son, Kyle, who is the head coach of the Niners. While the younger Shanahan has other issues to worry about, he took time to offer an interesting answer to a clever question from Marshall.

Kyle’s answer: “Lookie Jaguar. I wanna give my WR a two-way go.” pic.twitter.com/iJEjPvL66u

Marshall told Shanhan that when things got tense in Denver, Mike Shanahan would put him in the slot and say “Brandon, get open.” He also explained what the elder Shanahan’s go-to play call was in the situation. Marshall then asked Kyle Shanahan if he had a go-to call when the game gets tight.

Shanahan had an incredible answer.

“What coverage are they playing,” he first asked.

But then Shanahan offered a piece of information that he may want back.

“I’m probably gonna go lookie. Lookie Jaguar,” he said. “Which is almost the same play you’re talking about. But I’m gonna give my player a little more freedom and give him a two-way go and not just give him an out-break route.”

I can’t wait for this season man https://t.co/RE0fme2Z2T

But it begs the question, did he give away too much information? Shanahan is considered one of the brightest offensive minds in the game today. But now that opposing coaches have this information, could they use it against him?

Maybe the 49ers should save some of that aggression for other teams? https://t.co/ysvSg9cPs5

Whether or not it comes back to bite him, it’s clear Shanahan loved the exchange and it’s an interesting peak into the mind of one of the NFL’s best coaches.