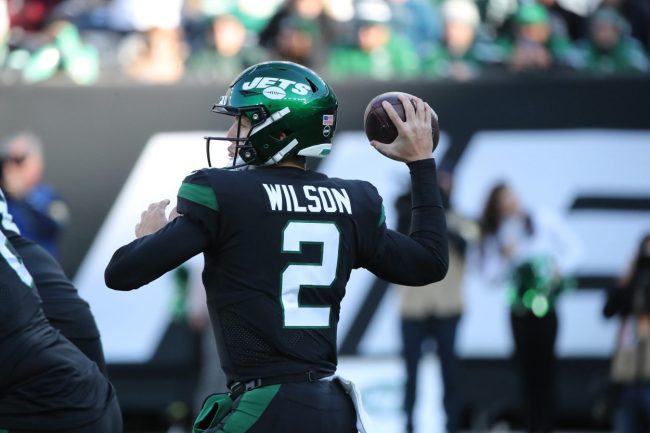 As the old saying goes, “it takes one to no one.”

Former NFL quarterback Brady Quinn was college superstar at Notre Dame. The Cleveland Browns then selected Quinn with the 22nd overall pick of the 2007 NFL Draft. Quinn lasted just three years in Cleveland. He then bounced around the league from Denver, to Kansas City, to Seattle, New York, St. Louis and finally Miami before retiring in 2014.

Quinn through a grand total of 12 touchdowns compared to 17 interceptions over seven NFL seasons. He’s considered one of the largest NFL draft busts of the 21st century.

So when he talks about New York Jets’ quarterback Zach Wilson, it should be reason for concern for Jets fans. Quinn is a known Wilson hater, something he discussed recently on the Pat McAfee Show.

What's your deal with Zach Wilson?

"I just think New York is dying for a team to have success & I don't think the discussion of him being the future is warranted yet" ~@Brady_Quinn#PMSLive pic.twitter.com/dWBEcYIoKT

He then went on Fox Sports radio and absolutely laid into Wilson yet again for what he called an “awful” preseason performance before being injured against the Philadelphia Eagles.

“Can we acknowledge, once again, the media just continually tries to make it something? They want so badly for this to work out, and it’s kind of tough, honestly, to listen to,” Quinn said. “I’ve not seen a quarterback get more love for doing less from the media than Zach Wilson in a long time.”

Wilson had what we’ll call an interesting offseason. But he’s impressed at times since returning to the field for training camp.

Against the Eagles, however, he went just 3-for-5 for 23 yards and an interception before leaving the game with a reported bone bruise and meniscus tear.

Is Tom Brady ever coming back to the Tampa Bay Buccaneers? https://t.co/axd6oB4UZZ

He underwent successful arthroscopic surgery to repair the damage, but won’t return in time to start the regular season. Instead, Joe Flacco will get the call when the Jets start the season on Sept. 11. New York will face the Baltimore Ravens, who Flacco led to victory in Super Bowl 47 against the San Francisco 49ers.