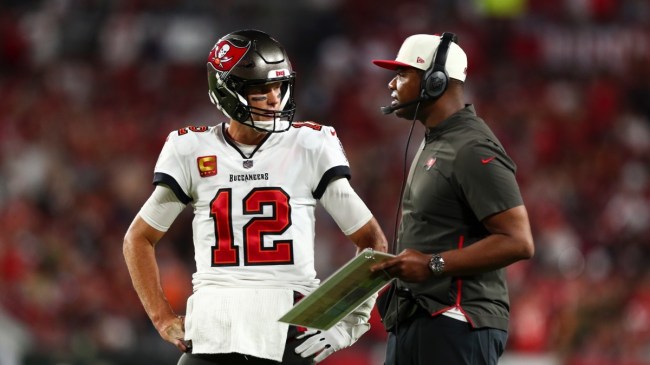 Buccaneers’ quarterback Tom Brady has broken basically every record you can as a quarterback. The seven-time Super Bowl Champion is the all-time leader in nearly every meaningful statistical category and due to his longevity, those records never be broken.

It would be pretty hard for Tom Terrific to find new records to break. After all, the 45-year-old has now been a starting quarterback in the league for twenty-two seasons. But, he somehow found another one in the Bucs’ 41-31 loss to the Kansas City Chiefs last night.

Yes, the Buccaneers lost, but it was not due to the play of Tom Brady. He was 39-52 for 385 yards and 3 touchdowns and no interceptions. That should get you a win, but the Bucs defense could not get off the field against the Chiefs.

Tom Brady is the first player in NFL history to complete 75.0+ percent of his passes for 350+ yards with no interceptions and yet lose the game by double digits.

That’s quite the stat, given how pass-happy the league is. He was absolutely terrific Sunday night. The arm strength is unbelievable for a 45-year-old and it was the first game he really had all his weapons. He did it without the benefit of a run game as the Bucs only had 3 rushing yards for the entire game.

Everyone always says father time is undefeated. And, in the end it probably is. But, he has kept the fight going against his biological clock for seemingly as long as possible.

Brady still being able to do this is so unreal

This is an unbelievable stat. That’s just so many touchdowns.

Including the postseason, that was the 1,100th touchdown drive that Tom Brady has led.

That’s 156 more than the next closest QB.

Tampa Bay had been super conservative before Sunday on offense. But, they finally unleashed Brady and the offense delivered.

It was a loss for the Buccaneers, but the GOAT proved once again why he is the greatest to ever do it.