Tom Brady Has Set A Record No One Will Ever Break 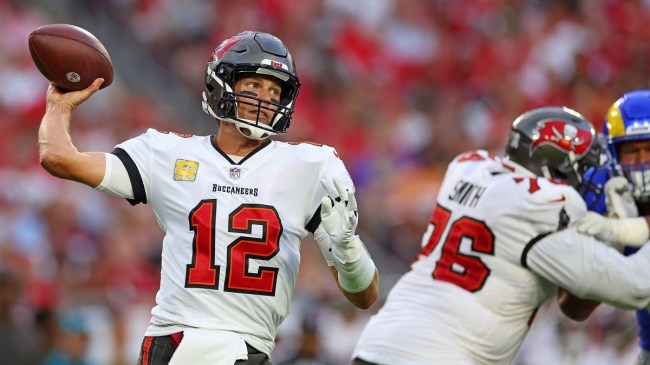 Tom Brady has a lot of NFL records. The quarterback, now in his 23rd season in the NFL, is widely regarded as the greatest signal-caller in league history, and each week it seems like he does something that adds to that legacy. This week, it was an epic 4th quarter comeback against the Rams that made us all remember how good he is.

But, something else happened in that game that was noteworthy, and it’s something likely none of us will ever see again.

early in the 4th quarter, with the Bucs facing a 3rd and 20, he dumped the ball of to Leonard Fournette. Fournette scampered for 16 yards and, with that, he went over 100,000 career passing yards.

100,000 passing yards for the 🐐 @TomBrady pic.twitter.com/QrXpeWtWpi

I know this isn't exactly the game to be discussing accomplishments, but Tom Brady eclipsing 100,000 passing yards is an incredible feat. Longevity and productivity. A mark very few will ever have the chance to surpass.

The vast majority of those yards were with the Patriots, where he spent nineteen seasons as the starter and won six Super Bowls.

100,000 is a laughably high number. He could walk from Baltimore, Maryland, all the way through Washington DC and into the Virginia suburbs with those 100,000 yards. It’s over two marathons, distance wise. Just a wild feat we will never see again.

Brady having 100,000 passing yards has to be the most made-up sounding stat of all time