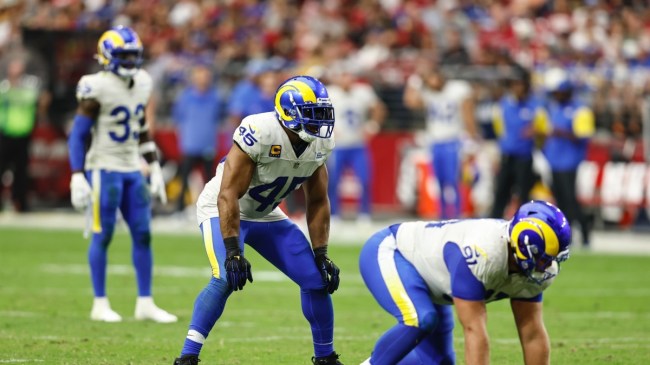 Bobby Wagner is one of the best middle linebackers ever. The eight-time all-pro and Super Bowl champion is a lock for the Hall of Fame after his career. All eight of those all-pro appearances came with the Seattle Seahawks, but this year Wagner is with a new team, the division rival Los Angeles Rams.

And, in week 4’s Monday Night Game between the Rams and 49ers, he had a new kind of highlight. It wasn’t a pick-six or a sack or a fumble recovery, but it was still pretty memorable.

Of course, idiots run on the field all the time. And, someone did it during Monday Night’s game. Bobby Wagner had other ideas.

Peyton and Eli broke down Bobby Wagner stopping a fan on the field.

Peyton and Eli broke down Bobby Wagner stopping a fan on the field.

Goodness gracious. What a hit.

Instantly, people posted clips about the famous Mike Ditka hit back in his legendary career.

And this one involving Colts legend Mike Curtis…

I posted that too pic.twitter.com/tt5z4H7DyY

Some are thinking that it was a gender reveal, given that there was a pink smoke bomb. If so, most painful gender reveal ever. But, maybe the most watched one too.

Bobby Wagner don’t care about your gender reveal. He is the Daddy now. pic.twitter.com/rn0s8Avu1N

Turns out they were vegan activists

RELEASED: Alex and Allison, the 2 activists who disrupted tonight’s NFL game, have been released from police custody. Alex, who was tackled by Bobby Wagner, has a burn on his arm. Otherwise, they’re a bit beaten up but in good spirits. pic.twitter.com/svajBkuDz3

In the meantime, I’m going to go cook up some bacon.