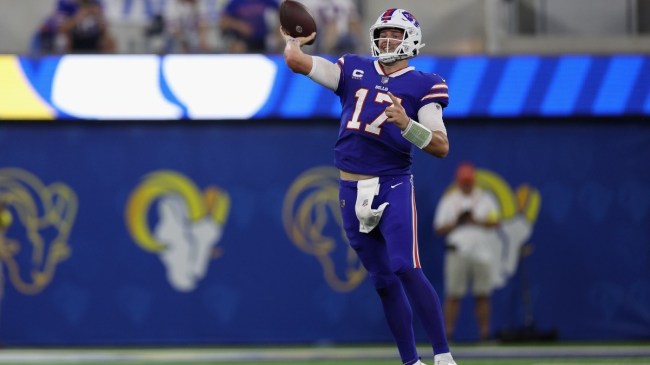 INGLEWOOD, CALIFORNIA - SEPTEMBER 08: Quarterback Josh Allen #17 of the Buffalo Bills throws a pass during the fourth quarter of the NFL game against the Los Angeles Rams at SoFi Stadium on September 08, 2022 in Inglewood, California. (Photo by Harry How/Getty Images)

The Buffalo Bills have famously come closer to any franchise to winning a Super Bowl without having any Lombardi Trophies. They famously lost four straight Super Bowl Appearances in the early 90s and haven’t been back to the Super Bowl since. That seems likely to change.

After their wild loss to the Chiefs last year in the AFC Divisional Round, people saw the potential Josh Allen and his teammates had. They added Von Miller in the offseason, too, and blew out the Super Bowl Champion Rams to start the NFL season. And, on Monday Night Football against the Titans, they look like an all-time great team.

Social Media is loving the Bills

It’s hard to not be excited when watching Allen and company. And, that defense looks even better than anyone could have ever imagined.

Former NFL punter Pat McAfee had to chime in on the Bills.

Bills appear to be an ABSOLUTE WAGON

This is the ultimate compliment, as the 2007 Patriots are the best NFL team of the last 50 years. But, that season did not have a fairy tale ending.

One of the biggest reasons they are so good is the Allen to Stefon Diggs combo. They hooked up for three touchdowns through three quarters and looked to be the best quarterback/wide receiver combo in the league. Dolphins star Tyreek Hill, who will face the Bills in Week 3, agrees.

OF course, it’s pretty easy to be good against coverage like this.

ALLEN AND DIGGS CAN’T BE STOPPED 😤

Who knows, maybe this is the best the Bills will look all year and they’ll suffer an early exit in the playoffs. But, it’s hard to imagine a team this talented having things go poorly unless the injury bug strikes.