Gigantic New Big Ten TV Deal Would Put The Conference On Every Channel Available, Except For ESPN 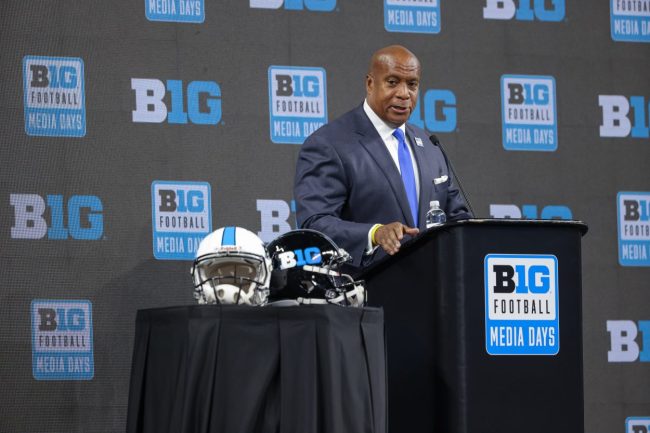 Big Ten commissioner Kevin Warren looks as if he’s about to take a sizable, calculated risk that will likely shape his legacy as the conference’s head man.

John Ourand of Sports Business Journal reported late Monday night that the conference is in the home stretch of negotiating a deal with both CBS and NBC for its television rights starting in 2023. That deal would join the one the conference already has with FOX as its primary broadcaster.

Tonight's SBJ Media
* Fox, CBS and NBC emerge as front runners for Big Ten deals
* ESPN, Amazon still talking, but both are on the outside looking in
* Deals could be completed as early as this week or nexthttps://t.co/p7BVat3fcl

Should the deals go forward, the Big Ten would part ways with ESPN for the first time in 40 years. The deal would also include the conference’s basketball media rights.

Though the deal appears close, Ourand says that nothing is over until the paperwork is signed and that ESPN is still negotiating.

Barring a last-minute change of direction in the Big Ten’s media rights negotiations, ESPN will be without the conference’s football and basketball games for the first time in 40 years. With Big Ten negotiations nearing an end — I’m told agreements could be reached by the end of this week or push into next — CBS and NBC have emerged as the clear front runners to pick up Big Ten rights alongside Fox Sports.

ESPN still is negotiating with the conference, and as long as they’re talking there remains the possibility ESPN could wind up with a package.

The Big Ten expects to bring in north of $1.5 billion in separate media deals. The move would also see the conference have featured time slots on all three major over-the-air networks.

The conference is now looking to earn a minimum of $1.5 billion annually in media rights, per @achristovichh and @MMcCarthyREV ⤵️https://t.co/eTAgM9VVN4

What About The Golden Domers?

Fans also wondered what the move means for Notre Dame. The Big Ten is reportedly courting the blue blood powerhouse, and NBC has been the Fighting Irish’s primary broadcast partner since 1991.

A big question about the Big Ten TV deal is what impact it has on Notre Dame.

Does the Big Ten likely having NBC, Irish rivals (USC, Mich, MSU, Purdue) and more money to offer finally convince them to join?

Of course, NBC getting a piece of the Big Ten could put more pressure on Notre Dame to join the league, which would really blow things up. That's why I led with the caveat.

Probably a lot to unpack here, but the idea of NBC blocking out the prime time window for a Big Ten game at the expense of broadcasting a Notre Dame home night game seems … weird? https://t.co/rSHZfqNLrU

Regardless of how things shake out, the Big Ten figures to reel in a monstrous pay day that could continue to flip the college football world on its head.

They need to take somebody's coaches poll vote away. https://t.co/WUxwF0Se5k

Monday’s news just adds another twist in what has been an absolutely crazy college football offseason.