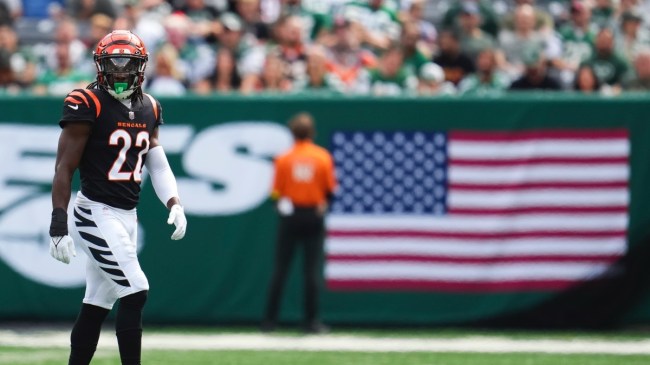 Injuries are already significantly impacting the Cincinnati Bengals. The team is already without star receiver Ja’Marr Chase. And, they felt that loss in a dismal offensive performance against the Browns on Monday Night Football, losing 32-13.

And, injuries are starting to pile up. During Monday Night’s game, starting cornerback Chidobe Awuzie went down with a right knee injury. And, initial impressions of that injury are not good.

Awuzie hurt himself on this play.

By video, our panel of former #NFL doctors have significant worry #Bengals CB Chidobe Awuzie suffered a torn ACL in his right knee on this play pic.twitter.com/WuAVkfT4RP

And, it was immediately not good, as he had to be carted off. He was ruled out of returning soon after.

#Bengals CB Chidobe Awuzie was carted to the locker room with a knee injury and has been ruled out for the rest of tonight’s game. Not good.

That was the first sign of trouble for the cornerback, who has emerged as one of the better corners in the NFL this year.

Chidobe Awuzie has a knee injury and has been declared out. When a player is ruled out this quickly, it's not good. FYI.

After the game, Zac Taylor addressed the injury.

That sounds not ideal, and more or less confirms what the panel of doctors thought in terms of the severity of the injury.

Bengals fans react to the injury

Most Bengals fans think the injury is going to cost the team significantly. It’s even more impactful when you consider the injuries the team already has, including Chase and defensive lineman DJ Reader.

Even if it’s a loss the lessons from defeat prove lessons win couldn’t and builds you. Awuzie injury really hurts. Even at 4-4 only halfway through the season, is no time to panic. Who Dey

It’s a big blow to their already tenuous playoff chances at 4-4.

Luckily for the team, they will have until Tuesday afternoon to make a trade to help boost their secondary. But, that’s not a lot of time, and it’s unclear who is on the market.

Needless to say, this team cannot afford many more injuries.