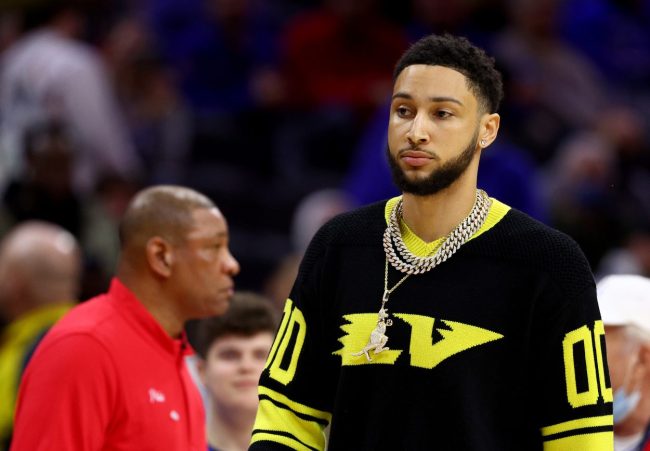 In case Ben Simmons thought that he had finally slipped the mind of Philadelphia 76ers fans, he received a brutal reminder otherwise on Thursday.

Simmons has already been the subject of a number of jokes from NBA fans this summer. But the latest one might be the most brutal, and it came from an unlikely source.

State rep. and ex-U.S. Senate candidate @malcolmkenyatta piles on, says Kenney should go and that he has "Ben Simmons" energy pic.twitter.com/NMF2fre6JW

Malcolm Kenyatta is a Pennsylvania state representative from Philadelphia who very recently ran for US Senate. Kenyatta spoke Thursday in response to recent comments from Philadelphia Mayor Jim Kenney saying that he’ll “be happy” when he’s no longer the city’s mayor.

That’s where Simmons comes in.

“The absolute last things we need is a Ben Simmons attitude in City Hall,” Kenyatta said of the controversial mayor.

The comments referred to Simmons’ refusal to take the court for the Philadelphia 76ers last year after criticism stemming from his poor performance in the 2021 NBA playoffs. Simmons was then traded to the Brooklyn Nets in a package that returned James Harden to Philly.

Sixers fans clearly haven’t forgotten about Simmons, and the replies to Kenyatta’s comments only continued to pile on.

This is a strong analogy.

The rhetorical equivalent of beating a guy's ass on the floor of Congress https://t.co/6P2LlCuMzO

Perhaps the most biting criticism ever levied upon an elected official. https://t.co/JTiJZEXHJh

Kenyatta is no fool and would be one of the top candidates to potentially replace Kenney should he step down. But that didn’t stop Philly fans from loving every word of what he said. As for Simmons, it appears that the ill will between he and Sixers fans isn’t going to die down anytime soon. This is despite having joined the Nets and not played a game in over a year.