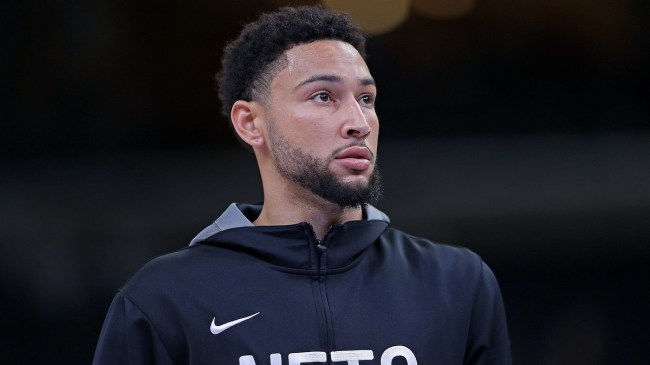 It didn’t take long for Brooklyn Nets forward Ben Simmons to become the subject of the internet’s jokes again.

It’s no surprise that Simmons has had his struggles in the NBA at this point. However, the 2022-23 season is off to a particularly bad start for him. Just on Monday, he made a ridiculous mental error and got baited into fouling out against the Memphis Grizzlies.

With the Nets hosting the Dallas Mavericks on Thursday, it was another rough night for Simmons. He shot 1-for-4 in the first quarter and had an incredibly awful airball on a wide-open layup.

Airballs are nothing new in the NBA, but this one is particularly terrible. Not only is the shot itself horrendous, but there was actually an open lane to the rim.

Luka Dončić literally moves out of the way, but Simmons chooses not to drive through. It’s as if he’s trying to avoid all potential contact and it’s got NBA fans convinced that he’s afraid of the basket.

bro is absolutely terrified of the rim

If there’s such a thing as “basketphobia,” Ben Simmons definitely has it.

Nah theres no way hes gotta have basketphobia or something

At least Kyrie Irving now has an answer as to why Simmons didn’t shoot a wide-open opportunity against the Milwaukee Bucks on Wednesday.

With Simmons going viral for something new each week, some Nets fans have had enough.

It wasn’t a complete disaster of a night for Simmons though. He came up with a clutch steal and assist in the final 15 seconds to help push the game to overtime.

Unfortunately, it wasn’t enough as the Nets lost 129-125 and fell to 1-4 on the season. Simmons finished the night 3-of-7 from the field with 7 points.