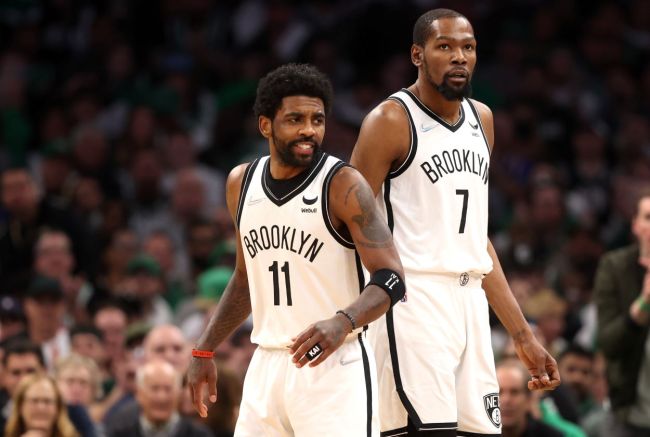 After all that, weeks of rumors and speculation, Kyrie Irving is going nowhere.

Shams Charania of The Athletic reported Monday night that the Brooklyn Nets superstar point guard is opting into the final year of his contract.

Brooklyn Nets star Kyrie Irving is opting into his $37 million player option for the 2022-23 season, @TheAthletic @Stadium has learned. Irving is bypassing on multiple opt-in and trade scenarios to fulfill his four-year commitment to the Nets and Kevin Durant.

That news comes after countless rumors, first that Irving wasn’t on the same page with the Nets, then that Irving had actually asked and received permission to seek a sign and trade.

Nobody really seemed to want to sign and trade for Irving.

That news shouldn’t come as a huge surprise. Irving has played just 103 games and missed 123 over the last three seasons in Brooklyn. Because his seemingly aloof attitude, his injury history and his vaccine hesitance, it’s easy to see why franchises see the seven-time NBA All-Star as a ticking time bomb.

But that’s not how Irving sees it.

Kyrie Irving: “Normal people keep the world going, but those who dare to be different lead us into tomorrow. I’ve made my decision to opt in. See you in the fall. A11even.” https://t.co/rpiS8YkSZI

What exactly is different about opting into $37 million contract? We don’t know! But it’s a bold stance by Irving, who could’ve instead been playing for the $6 million mid-level exception if he truly wanted to play for the Lakers.

Fans across the league seemed to be tired of Irving’s act.

Only the type of nutjob who actually believes the Earth is flat could conceivably spin "opting into $37M for one year" as "daring to be different" https://t.co/DXV1itvXGB

How brave. What a visionary. To accept 37 million to play a game. What a brave man! I can’t believe he is so strong. My god 😂🤡 https://t.co/xeYmjkybYC

Kyrie making himself a martyr for not giving up 30 million is quite a strategy https://t.co/NkGoar8geJ

After weeks of weird interviews and crazy headlines, Irving is heading back to Brooklyn and the Nets might well be a formidable force in 2022-23. If, of course, Irving actually takes the court more often than not.