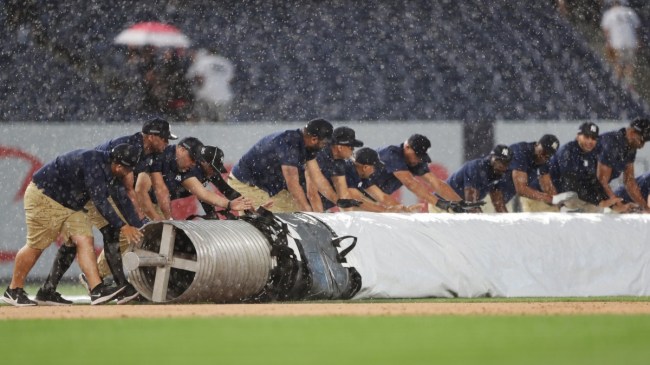 Monday night was supposed to be a big night in the Bronx. Yankee Stadium was supposed to be the host of the winner-take-all game 5 of the ALDS with the Cleveland Guardians and the home team Yankees. This came a night after Gerrit Cole saved the Yankees’ season by pitching a gem.

But, things did not go as planned on Monday evening, as the weather interfered with plans to play the game. And yes, weather issues do happen in outdoor sports such as baseball.

The first pitch was supposed to start just after 7 PM on the East Coast. But, the rain started coming down approximately a half-hour before that, and the tarp was brought out.

Of course, that rain was in the forecast all day, and they could’ve just postponed it till Tuesday, allowing fans to go home. But, Manfred and company aren’t that smart.

I like to think all the rain delays before have prepared me for this moment. Just gotta trust your preparation and execute. Same game.

Given that the tarp is still very much on, pretty much no shot this game starts before 10. Which is not the ideal circumstances for the most important game of anyone's season, but life is not played under ideal circumstances. So here we are.

This is the 2nd rainout in the series after game 2 was postponed last Thursday. This means the winner of tomorrow’s game will have to play 7 times in 8 days potentially in the ALCS.

People are furious with the handling of the situation

people are rightfully upset by this.

One of the worst botch jobs by MLB that I can remember.

They knew the forecast tonight for a full day. Still had everyone show up like everything is normal then proceed to give no updates for 2.5 hours, all while *hoping* the forecast magically improved?

I mean what the hell.

And, some think it helps the Yankees a ton as it gives their taxed bullpen a chance to rest.

.@mlb delaying so yankees can get the bullpen a little recovery time. WEAK

.@mlb delaying so yankees can get the bullpen a little recovery time. WEAK

Not a good look for a league that struggles mightily with their public perception!