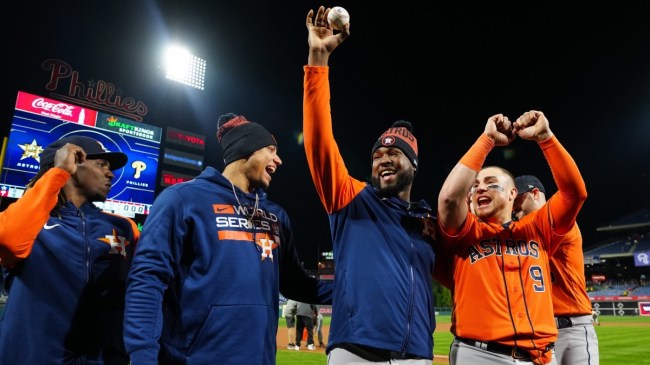 The Houston Astros made history Wednesday night when Christian Javier, Bryan Abreu, Rafael Montero and Ryan Pressley combined on a no-hitter in a 5-0 win over the Philadelphia Phillies in game 4 of the World Series to the series up at two games apiece. It is the first no-hitter in the World Series since Don Larsen’s perfect game for the Yankees back in 1956.

But, there was still some controversy. Astros manager Dusty Baker elected to take the starter Javier out after 97 pitches through six innings. It worked out, obviously, as they won the game. And, it’s the World Series, so you’d think that things like a no-hitter would take a back seat. But, some baseball purists were still ticked off about how the game went.

Everyone knows that baseball fans can be a bit stuck in their ways. This was no different, as people were furious that he was taken out of the game heading to the 7th inning.

I just don’t get how Javier gets taken out of the game with a no hitter and just overpowering the Philly lineup. Dusty, you better be right. Not an Astros fan here but a baseball purist. #WorldSeries

It sucks Javier is going to get taken out because baseball isn’t fun because he really might have had a no-no. These swings aren’t even close.

Even the legendary Mets radio broadcaster Howie Rose was complaining.

Well, a historic night for the Houston Astros. Good for them. History is supposed to taste like pizza or ice cream. That tasted like quinoa and couscous.

That’s an analogy only Howie Rose could make.

The Astros will look to take a 3-2 series lead Thursday night in Philadelphia.