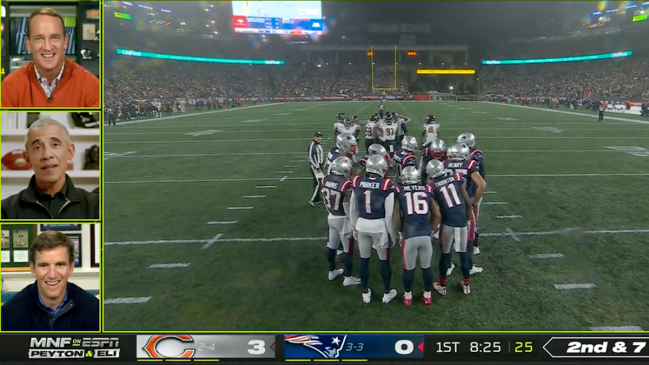 ESPN’s beloved ManningCast was back in action on Monday night for the Bears-Patriots game after a short two-week break.

The alternate Monday Night Football broadcast continued its trend of welcoming star guests in its return with former President and die-hard Chicago sports fan Barack Obama joining during the first quarter of the game.

It was a guest appearance for the books, arguably the show’s best yet, with some amazing back-and-forth. While Obama was the guest on Monday night, the Manning brothers flipped the script for a hilarious moment.

Since both Eli and Peyton had previously met the president following their respective Super Bowl victories, they were dying to know who the better White House guest was. Like a true politician, Obama picked his words carefully in his response.

Who was the better White House guest: Peyton or @EliManning?

Both Manning brothers just so happened to win a Super Bowl during Obama’s presidency and visited the White House as is tradition for championship-winning American sports teams.

Eli made the visit first in 2012 with the New York Giants. Four years later in 2016, Peyton would make the visit after winning Super Bowl 50 with the Denver Broncos.

"Both of you guys were gentlemen… there was some silverware missing after your visit, but we couldn't directly trace it to you." – @BarackObama pic.twitter.com/jUm29bZMDZ

With 8 minutes still left in the quarter, Obama was clever not to hurt any feelings. He opted to remain neutral, claiming both brothers were gentlemen during their visits.

The former president went on to summarize how it’s always fun whenever athletes visit the White House. He even poked fun at the Mannings too, joking that some silverware was missing following the visit.

All in all, it was a superb guest appearance from Obama to kick off the ManningCast’s return. It certainly made for a tough act for Bill Burr and Vince Vaughn to follow.

With fans absolutely loving it though, perhaps we’ll see more of the former president on future ManningCasts.