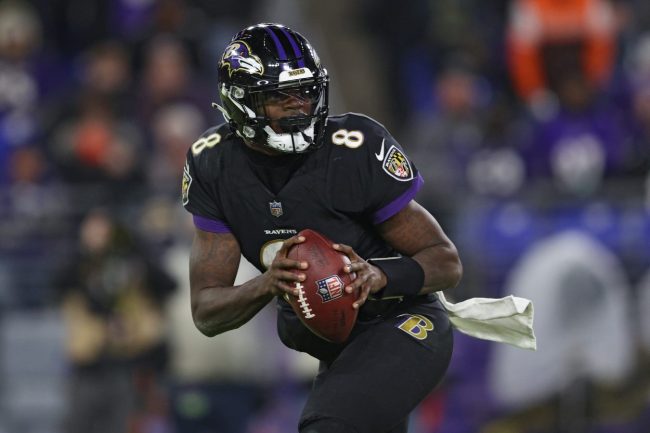 Lamar Jackson’s eventful NFL offseason continued on Wednesday. The Baltimore Ravens’ franchise quarterback, who NFL execs don’t seem to think is a top-10 QB in the league, has been at the center of league news throughout the summer.

First, he skipped Baltimore Ravens organized team activities as he tries to negotiate a new contract with the Ravens. That put fans across the league on edge as the NFL season approaches. Then he got into a very public feud with former NFL QB Chris Simms, who ripped into Jackson for missing OTAs. Jackson followed by taking to Instagram to and making a very clear statement to the Baltimore organization. After trying to set the record straight, he only brought more questions upon himself.

Now Jackson is back on social media, this time Twitter, and back in the firing line.

Bernard Pollard spent two years with the Baltimore Ravens during his nine-year NFL career. Pollard joined Baltimore in 2011 and stayed through the 2012-13 season. The Ravens won Super Bowl 47 in 2013 with Pollard as the starting safety. The NFL vet made 98 tackles to go along with two sacks and one interception during the season, but was far from a star player.

Pollard had some harsh criticism for Jackson when discussing whether or not he’s one of the league’s 10-best quarterbacks.

No TOP Wr will ever come there while LJ is there. Plenty of WRs have been available to get in the off-season while LJ has been starting, but nobody wants to go. They give him the respect, but they don’t want to play with him. LJ is good but he’s not able to make the throws.

That didn’t sit well with Jackson, who fired right back.

Pollard wasn’t going to take the comment lying down.

Turn on the film. I’ll teach you how to read a defense…

Which set off a continued exchange.

🤣🤣🤣🤣the last person I would go to for anything football related lil bra Talk to me about the best nascars out I’m all ears and eyes👂🏾👀 https://t.co/XxbgUoBQ2d

And that’s cool. Just take that pacifier out your mouth and learn to make a check so you don’t fumble the ball running into the blitz… “check check” oh wait you can’t do that…

Jackson and Pollard exchanged barbs throughout the night with the QB making fun of Pollard’s Super Bowl performance and the safety telling Jackson to win a ring before he talks to him.

The former NFL MVP quarterback still doesn’t have the contract he’s seeking and it’s hard to feel like this is going to help him in negotiations.