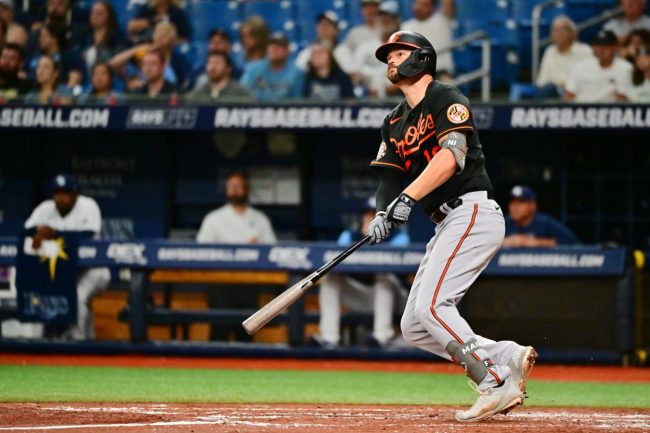 Baltimore Orioles outfielder Trey Mancini may not playing for the team for too much longer. The 2021 American League Comeback Player of the Year has been brought up in trade talks across the league.

If Mancini is headed out of Baltimore, which surprisingly boasts one of the hottest teams in all of baseball, he’s leaving on an incredible note.

During the eighth inning the Orioles game with AL East division rival Tampa Bay on Thursday, Mancini hit one the strangest, most hilarious inside-the-park home runs that you will ever see.

With a runner on second, two strikes and one out, Mancini hit a deep fly ball that looked like a simple play for Rays right fielder Josh Lowe. Lowe, with sunglasses firmly planted on top of his hat, lost track of the ball in the sun. Instead of catching it, the ball clanks off of the outfielder’s noggin and into the right field corner. Center fielder Roman Quinn backed up the play, but the relay throw was too late and Mancini came all the way around to score.

Baseball fans couldn’t believe what they had just seen.

One of the funnier things I've seen on a baseball field that happened to come at my own expense https://t.co/LTvHCu2nRA

I am cackling at my desk https://t.co/tAA26ahJxj

Others just hope they’ll get to continue to see Mancini in Baltimore.

I kinda hope the Orioles are buyers and keep Mancini, his veteran presence is invaluable. https://t.co/yjhsBurNZd

Hope it's not his last at OPACY, BUT MAAAN https://t.co/f1rvffhiSX

The Orioles won the game 3-0 to move to 50-49 and just three games behind Tampa Bay for the finals AL Wild Card spot. Here’s to hoping there’s more fun to come at Camden Yards this season.