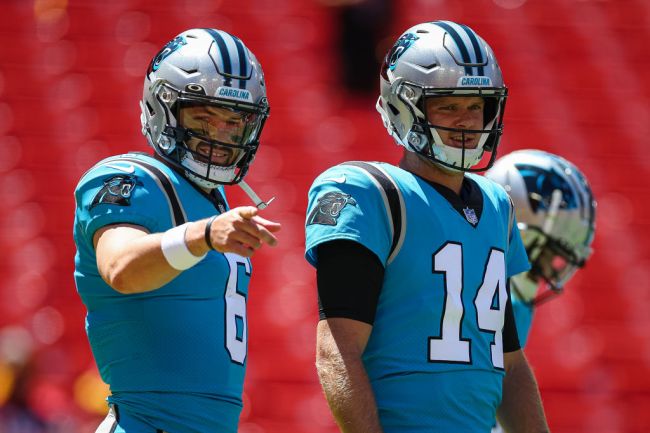 The Carolina Panthers quarterback battle has seemingly come to an end and all signs point toward a Week 1 revenge match for Baker Mayfield.

The Panthers acquired Mayfield from the Cleveland Browns this past off-season but remained hesitant to name him as their starter. Coach Matt Rhule kept last year’s starter Sam Darnold in the mix and the two engaged in a friendly QB competition.

While reports had Mayfield pulling ahead in the race, Rhule insisted that a decision wouldn’t come until after the team’s second preseason game against the New England Patriots. It seems that’s no longer the case.

According to a report from Jeff Howe of The Athletic, the Panthers have already made a decision and Mayfield is the expected starter ahead of Week 1.

Baker Mayfield is expected to be named the Panthers starting QB for Week 1, per sources. He’s been competing with Sam Darnold but should be declared the starter when the team is ready to make the announcement. @TheAthletic

The Panthers quarterback battle is over and it’s no surprise who has come out on top. Carolina took the initiative and traded for Mayfield. Taking on part of his salary only for him to sit on the bench isn’t an ideal way to start the season. It’s even worse when considering Darnold, who threw more interceptions than touchdowns in his last two seasons, would be taking over instead.

Luckily, it appears the 2018 #1 overall draft pick has given his coach enough confidence to make a decision. Mayfield started the team’s preseason opener against the Washington Commanders, completing 4 of 7 passes for 45 yards.

Want to live forever? Former Pro Bowl quarterback Jake Plummer believes he may have found the key to doing so. https://t.co/y9bZXO7GgF

With the Panthers expected to name Baker Mayfield as their Week 1 starter, it just so happens they’ll face the Cleveland Browns. It’s some scheduling magic and the stars have aligned for Mayfield’s revenge on his former team.

It’s the beginning of a new era for Mayfield and it could be off to a pretty special start.