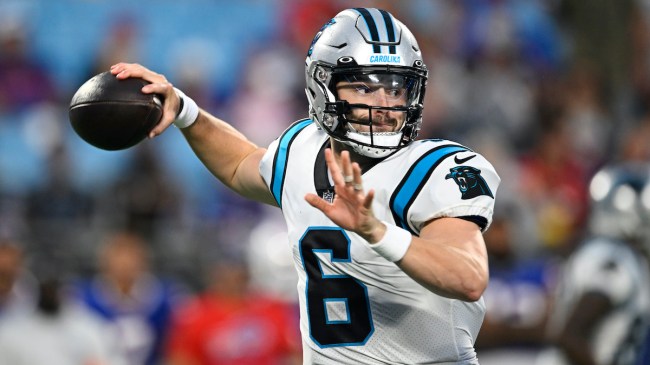 Comments made by Carolina Panthers’ Baker Mayfield have gone viral ahead of his Week 1 matchup against the Cleveland Browns. However, he’s now clearing the air on what was actually said.

When the Panthers named Mayfield the starter over Sam Darnold, fans immediately took note that he’d be facing his former team. Most figured Mayfield would be eager to exact his revenge and it appeared to be the case.

Cynthia Frelund of NFL Network revealed some unforgiving comments made by the former #1 overall pick, even reporting that he had said, “I’m gonna f*** them up.”

Following the blow-up on social media, Mayfield was asked about it during a media session on Wednesday. He clarified the comments by denying ever making them.

Baker Mayfield said he didn’t say what he was alleged to about effing up the Browns. pic.twitter.com/rtIcxeVH3H

“First, I didn’t say it. Obviously everybody’s going to write whatever story they want, there’s history that I played there the last four years. I’m an extremely competitive person. Everyone knows that. If I wasn’t wanting to win then there would be a really big issue with me being the quarterback here.

Yes, there’s history there. But for Mayfield, it’s just any other gameday. Whether he’s facing the Browns or another team, he’s bringing his intensity and desire to win no matter what.

“I want to win in everything I do. That’ll never change. That is not how I phrased it. It’s not even what I said.”

Mayfield goes on to say the comments were incorrectly phrased before denying them altogether. Whatever was actually said clearly didn’t come out as intended in Mayfield’s eyes. There’s always the chance he’s just backing down after Browns DE Myles Garret started using the comments for motivation.

Frelund previously appeared on the Ultimate Cleveland Sports Show this week to share her side of the story. While admitting she shouldn’t have shared the private conversation, she insists it was done to support the Panthers quarterback.

Baker said that to @cfrelund , who joined the show this morning to clarify exactly what happened and why it's being overblown #Brownshttps://t.co/bor1E1wvki pic.twitter.com/qvmPr2jnwG

It appears the comments were initially made by Frelund, although she claims it was in reference to the entire season and not just the Browns. Mayfield apparently agreed and that’s how it led here.

Agreeing with someone’s encouragement is very different than openly taking aim at a former team and that’s likely where Mayfield’s gripe is. Nevertheless, the situation has most definitely been blown out of proportion.

With nearly a week left until the game, Mayfield will need to block out the noise if he hopes to begin his career on the Panthers with a win.