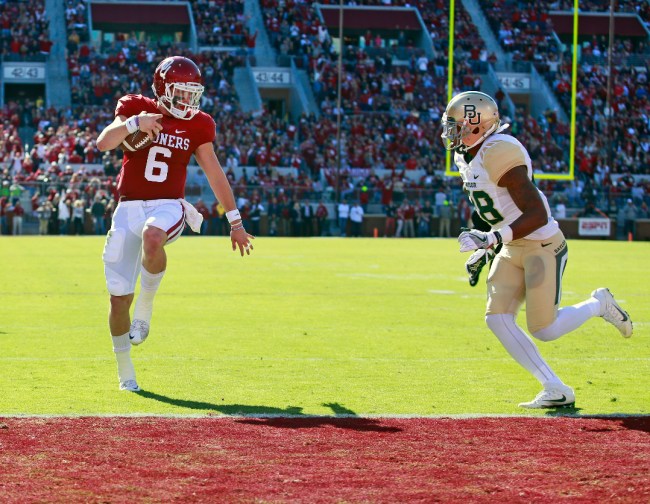 The Carolina Panthers have a new quarterback: Baker Mayfield. After months and months of ongoing rumors, the Cleveland Browns finally traded away Mayfield for a conditional fifth-round pick in 2024.

Now, Mayfield should be entrenched as the Panthers starter, although reports say there will be a battle between Sam Darnold and Mayfield.

Nonetheless, a new era is beginning in Carolina, although the recent track record of quarterbacks has been a terrible stretch.

Mayfield with join forces with head coach Matt Rhule, who spent time in the college ranks before transitioning to the NFL. As a matter of fact, Mayfield and Rhule have seen each other before from their days in the Big 12.

Baker Mayfield And Matt Rhule Are In For An Awkward Welcoming

The last time Mayfield and Rhule were on the same field was in 2017. Mayfield was the QB for the Oklahoma Sooners, and Rhule was the head coach for the Baylor Bears.

What Mayfield said probably still rings in Rhule’s ears and should make for an extremely awkward introduction.

The last time Baker Mayfield and Matt Rhule were on the same field together, Baker told the Baylor Bears in pregame: "You forgot who daddy is. I'm going to have to spank you…" https://t.co/qU45LdLSZS

Mayfield was getting Baylor all wound up and said, “You forgot who daddy is. I’m going to have to spank you.” Yeah, Rhule must remember the way this unfolded.

The Sooners went on to win the game, 49-41, and Mayfield threw three touchdown passes in the victory on the road.

Oh, and we didn’t even discuss the relationship between Mayfield and Panthers OC Ben McAdoo. It will be awkward once Mayfield enters the Panthers’ facility, and some bad blood will need to be erased from everybody’s memory.