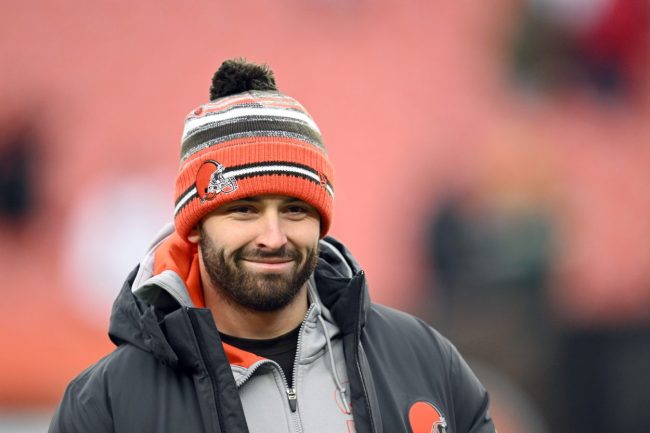 Our long national nightmare is over!

After what felt like a year-long saga where he was linked to the Carolina Panthers, the Seattle Seahawks, and then the Panthers again, Baker Mayfield has found a home.

The No. 1 overall pick in the 2018 NFL Draft is headed to the Carolina Panthers in exchange for a conditional fifth-round pick in the 2024 draft.

A new QB in Carolina: The #Panthers are acquiring former No. 1 overall pick Baker Mayfield from the #Browns for a 2024 conditional 5th-round draft pick, sources tell me and @TomPelissero. Deal is pending a physical. All parties split the financials to make it happen. pic.twitter.com/xuTLqosmZm

Mayfield is expected to be the starter in Carolina.

The Browns and Mayfield had a rocky relationship throughout his four-year run with the team. He led Cleveland to an 11-5 record and their first playoff appearance since 2002 in 2020. But he took a step back in 2021, throwing for just 17 touchdowns and 13 interceptions in an injury-riddled season where he went 6-8 as the starter.

Cleveland then traded for Deshaun Watson, which appeared to put a cap on Mayfield’s run as the team’s starting signal caller. While Watson may not be eligible to play for the Browns in 2022, Mayfield made it clear that he had no plans of staying.

Fans across the league seemed happy that the messy situation has finally been resolved.

Oh, and the Panthers week one opponent is none other than the Browns.

And the cherry on top of this Baker Mayfield trade:#Browns at #Panthers, Week 1.

Can y’all imagine how spicy Baker Mayfield is going to be postgame presser if he leads Panthers to a win over the Browns in Week 1?

Baker Mayfield and the Carolina Panthers are scheduled to play the Cleveland Browns in Week 1.

History will be made when the Browns and Panthers face off in Week 1 and both teams somehow lose. https://t.co/4J8q1m5FCz

Meanwhile, over on the left coast…

Jimmy G will have his salvation some day. Just maybe not someday soon.