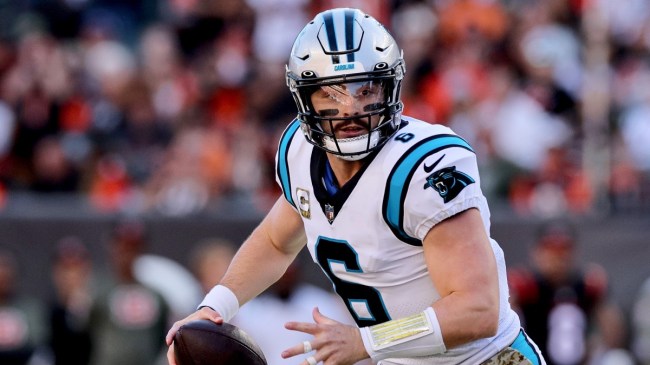 If you’ve watched Baker Mayfield play football this year, you know he’s not making the smartest decisions. Normally, it’s with the football, as he completed only 56.6% of his passes with a touchdown to interception ratio of a putrid 6-4. That resulted in his benching by the Carolina Panthers after five starts.

But, his team got a crucial win on Sunday, as the Carolina Panthers beat the Atlanta Falcons 25-15. Yes, the Panthers are only 3-7, but the 4-5 Buccaneers are leading the division, so it was a big win. And, Mayfield was pretty fired up.

I’m not sure I’ve ever seen a backup quarterback this excited about a win, but, Baker was pretty pumped up.

Baker Mayfield head butting teammates without a helmet on 🥴 pic.twitter.com/1GEOEsJ8qh

Did he think that his hat would protect him from the force of the helmets? Those aren’t love taps, either. He is full-on head-butting them. Is he trying to get a concussion so he doesn’t have to show up to work as a backup?

Is he trying to intentionally get CTE?

Bros trying to get CTE to hide his pain

And, people were breaking the memes out.

Baker when he gets home pic.twitter.com/TtjC7aur0p

As far as his future career prospects, I’m not giving up on Baker. Now, you may think I’m being completely insane. And maybe I am! But, I watched him at Oklahoma be ridiculously accurate for three full seasons. I know that guy is in there, and I don’t question his leadership skills at all. Would I bet my franchise on him? no. But, could I try to use him as a stopgap and see what happens? Also no. I’m not an NFL GM But I was….

The Panthers go to Baltimore next week.