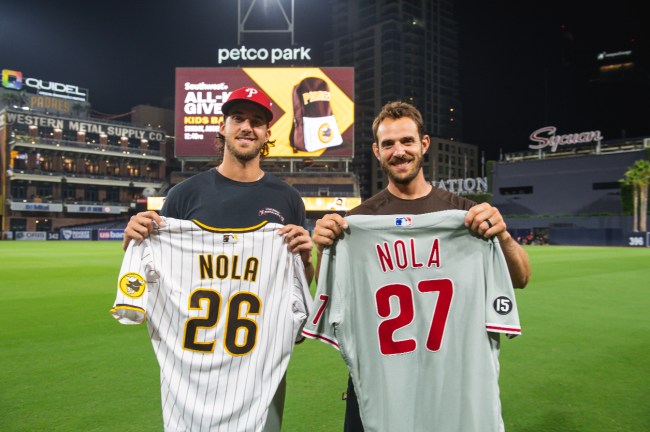 The San Diego Padres and Philadelphia Phillies game featured a literal brotherly showdown on Friday night. Aaron Nola took the mound for the Phillies, and Austin Nola got the start behind the plate for San Diego in a remarkable moment for the Nola family.

Early in the game, Aaron struck out his brother on a nasty pitch, earning a shoutout from the Pitching Ninja.

Aaron Nola K'ing Austin Nola on a Filthy Back Door Two Seamer with 19 inches of run. 😷

Well, things got even more awkward in the bottom of the sixth inning. Austin came up to the plate and smacked a single to right field, driving in Eric Hosmer and breaking the scoreless tie in a fantastic pitcher’s duel.

Austin Nola with a go-ahead hit against his brother!

What an incredible moment for the Nola family. Sure, you want both of them to succeed, and we can’t take away from Aaron’s terrific outing. He went seven innings, giving up just that one run on seven scattered hits and striking out 10 Padres hitters.

But, the dad’s reaction is priceless — apparently, he wasn’t too thrilled with Austin’s go-ahead bloop.

Dad Was Not Happy As Austin Nola Spoiled The Family Battle

Austin stood patient and outdueled his brother, a moment they will remember forever. But, the dad was not happy and was seen wearing a Phillies jersey.

Austin Nola gets an RBI single off of his brother to put the Padres on the board! pic.twitter.com/2hUsaChhHn

Let’s also give some credit to the camera crew for the quick flash to the Nola family in the stands.

The Padres wound up getting the victory, and that was the only run scored all game. So, Austin got the better of Aaron in the Nola Showdown for now.