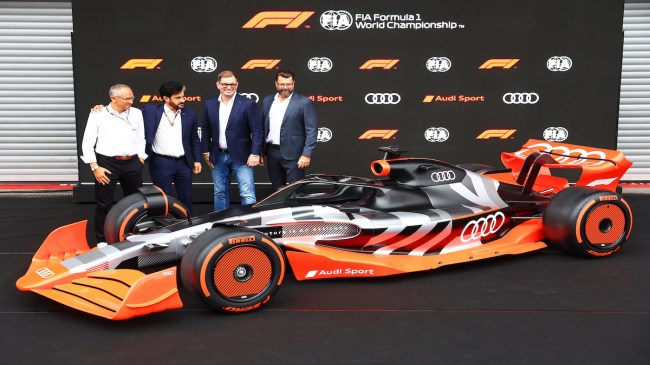 With the FIA approving new power unit regulations last week, the move for Volkwagen’s premium brands Audi and Porsche to join the F1 grid in 2026 has officially kicked into gear.

Confirmation for sister brand Audi finally came on Thursday ahead of the Belgian Grand Prix. The new entry into F1 debuted some stunning concept livery and also fired shots at their German rivals and former top dogs in the sport, Mercedes.

2026 is still years away, but Audi took this opportunity to poke some fun at their future competition. “Rings are the new stars” is in reference to Audi’s 4-ring logo and Mercedes’ three-pointed star logo.

It wasn’t the only jab Audi threw at the reigning Constructors’ Champions either. The VW brand began its press release by trolling Mercedes’ UK operations.

“The project will be based in Audi Sport’s facility in Neuburg near Ingolstadt. This is the first time in more than a decade that a Formula 1 power train will be built in Germany.”

Audi is simply stating the facts, but it still comes at their rival’s expense. Despite being a German brand, Mercedes builds their engines in England and not Germany.

With Audi officially entering the grid in 2026, a battle to become Germany’s top F1 team is on the horizon. Given how Audi is already trolling, it’s clear they’ll fit right at home in Formula One.

According to Audi’s press release, fans can expect an announcement on a partner team “by the end of this year”. Sauber, which parts ways with Alfa Romeo in 2023, is currently the expected landing destination.