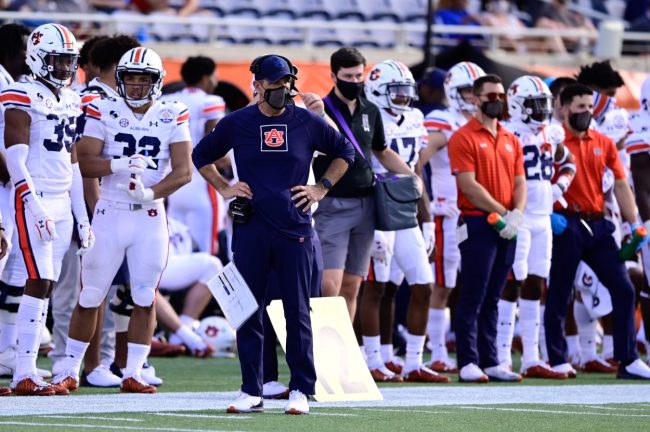 It appears that all is not well in Auburn, Alabama. Auburn football coach Bryan Harsin had a rough go of things in his first year with the Tigers. Harsin came to Auburn after seven years at the helm of Boise State. In his first SEC season, the Tigers struggled early and often and finished with a 6-7 record.

But that was just the start of his troubles. Throughout the season Harsin faced questions about his job status, and as soon as the season ended players began to jump ship. The biggest name among those transfers was three-year starting quarterback Bo Nix, who would up with the Oregon Ducks.

The mass exodus, which included both players and assistant coaches, as well as rumors about Harsin’s personal life, led to an investigation by the university.

While nothing came of the investigation, it led to a rift between Harsin and boosters. Despite that, Harsin says that the chaos that surrounded and appears to still surround the program is actually a good thing.

That seems unlikely, but Harsin was back in front of microphone this week for SEC Media Day and had plenty to say about the situation.

Before reporters could even begin to ask questions, Harsin began his press conference with an opening statement that addressed the strange investigation.

“There was an inquiry,” Harsin said. “It was uncomfortable. It was unfounded. It presented an opportunity for people to personally attack me, my family and also our program. And it didn’t work.”

Harsin continued to say that he felt the investigation was unnecessary and that was an attempt to take a direct swipe at him.

“I mean, you go back, and I don’t think even in our own division we weren’t the team that lost the most players,” Harsin said. “That’s not mentioned, whether that’s relevant or not, just, it is what it is. Coaching changes happen, and we brought in new players.”

But now he says it’s time for both the program and the university to move on.

“It was a week,” Harsin said. “And like I said, it was something that nobody wants to go through and they were able to open the doors and attack me and our players and everybody else and our program, and it didn’t work. So at the end of the day, let’s move on. What do we got to do to help these guys get better? Because they have a short amount of time to achieve their goals and dreams.”

If Harsin limps to a 6-7 record again in 2022, it’s difficult to see this all going away anytime soon. Auburn begins the new season on Sept. 3 with a non-conference game against FCS program Mercer.