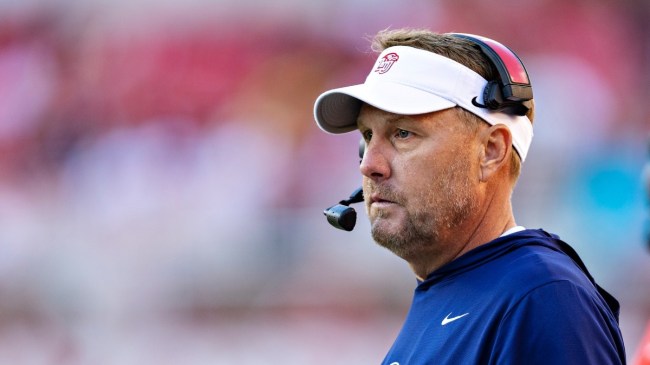 Auburn is quite the football program. There may not be a more chaotic football program in America. That’s saying something when Texas A&M exists. In the last decade, Auburn has gone through three coaches. Two of them beat Alabama en route to playing for a national title. The other was seconds away from pulling off arguably the biggest upset in the rivalry’s history in his first season. Of course, that coach, Bryan Harsin, was fired this year.

The coaching search was wild. For awhile, it looked like it would be Ole Miss coach Lane Kiffin. Even Clemson’s Dabo Swinney was mentioned. Those would’ve been fine hires. Both are good football coach, mature adults and good representatives of their universities.

But, they couldn’t do it the easy way on the Plains. Instead, they made the single worst hire in the history of their program and lost all credibility in the process.

Auburn is hiring Hugh Freeze as their next football coach

On Monday, news broke Auburn is hiring Hugh Freeze as their next coach.

BREAKING: Liberty coach Hugh Freeze is coming back to the SEC, per source. Auburn is hiring him as its new head coach. @RossDellenger first reported the move.

Yes, the same Hugh Freeze who was let go from Ole Miss for allegedly using his work phone to contact an escort service repeatedly. And, he has recently been accused of messaging sexual assault survivors to tell them to stop complaining.

Hugh Freeze got fired from Ole Miss for NCAA violations and for calling escort services on a cell phone that belonged to the university and then he got into the DMs of a sexual assault survivor, I cannot even begin to fathom how dumb this is going to get https://t.co/Jd112Hqvmv

Freeze serves as the head coach at Liberty, a religious institution whose former leader, Jerry Falwell Jr., was forced to step down after alleged infidelities involving his pool boy. The former high school coach has gone 34-15 there, though recently lost embarrassing games to UConn and New Mexico State.

This is good for me, though. I will get a ton of content out of Hugh Freeze.