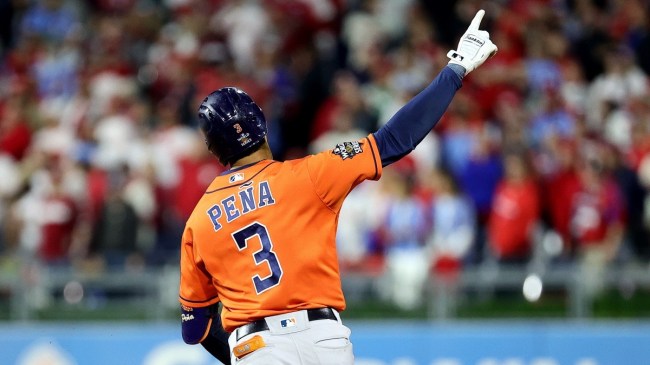 There have been 675 games played across the 118 editions of the World Series over the years. Nearly every possible baseball thing imaginable has been done. We even saw history earlier in this World Series, when the Astros combined for the 2nd no-hitter in World Series history. But, Astros rookie shortstop Jeremy Peña found a way to do something no player has ever done in the Fall Classic.

Jeremy Peña does it again for the @astros!

It's the rookie's 4th home run of the postseason. pic.twitter.com/Tgth9exc5Q

He became the first rookie shortstop to ever hit a home run in the World Series.

The first rookie SS with a home run EVER in the #WorldSeries: @Jpena221! pic.twitter.com/kJnKuSlj5x

It’s his fourth home run of the postseason and the rookie is showing why the Astros let star shortstop Carlos Correa walk in free agency last year. Peña is blossoming into a star in these playoffs. He follows in the footsteps of other Astros like Yordan Alvarez and Alec Bregman who also became household names in the playoffs.

Earlier in the year, he was also the first rookie shortstop to ever win a Gold Glove.

The first rookie shortstop EVER to win a Gold Glove. 🤩 pic.twitter.com/G0YbE2UZrM

And, people are recognizing just how good he is.

jeremy pena really is that dude

Jeremy Peña is a rookie. Hahaha league is screwed.

Even better for the Astros, Peña is already 25, meaning they will have him under team control for basically the entirety of his prime. What a luxury to have.

Houston will look to win the World Series on Saturday in Houston.