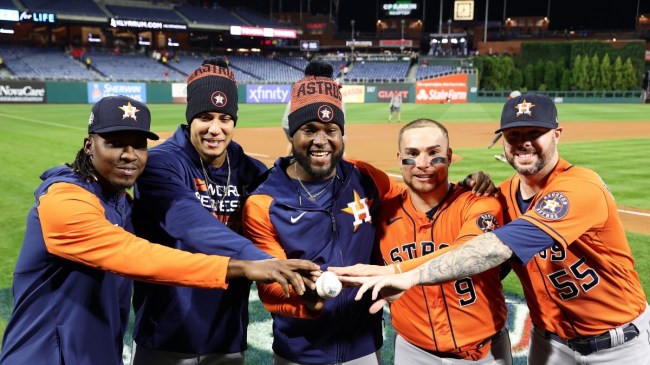 Don Larsen’s perfect game in 1956 has a special place in baseball lore. The New York Yankee pitched a perfect game against the Brooklyn Dodgers, and for 66 years it remained the only no-hitter in the Fall Classic. The Houston Astros changed that.

It is still the only perfect game in World Series history, but there is finally another World Series no-hitter. This time, it was of the combined variety.

It was close to a must-win for the Houston Astros, as they trailed the Philadelphia Phillies in the series 2-1.

And, for a while, it looked like it would be a pitcher’s duel, as the Astros’ Christian Javier and Phillies’ Aaron Nola threw up eight straight zeroes to keep the game scoreless through four.

But, Houston broke through for five runs in the top of the fifth, and at that point, all attention was on Javier. But, he got out of the sixth inning unscathed, with 9 strikeouts against two walks, the Fightin’s only baserunners when he was on the mound. He handed the ball to Bryan Abreu, who pitched a perfect 7th, followed by a perfect inning by Rafael Montero in the 8th. Then, it came down to closer Ryan Pressley. Pressley worked around a walk in the 9th and the Astros had made history.

FIRST WORLD SERIES NO HITTER SINCE 1956

Probably, more importantly, it ties the series up at two games a piece and puts home-field advantage back with Houston. They will play one final game in Philadelphia Thursday night before returning home to play game six and possibly game seven.

People were understandably excited. And, the memes were out.

The only two catchers to ever catch a no-hitter in the World Series: pic.twitter.com/CO6GkumfA0

It wasn’t a lucky no-hitter, either. They flummoxed the Phillies.

In the no-hitter, Astros pitching held the Phillies to an .081 xBA tonight. That's the lowest single-game xBA for any team in any postseason game in the Statcast Era. What a pitching clinic, and in the World Series, no less.

Of course, there’s a debate if a combined no-hitter is even a no-hitter at all. I lean that it is, but some don’t think so.

The Astros throwing a no-hitter in the World Series but it being a combined no-hitter is just going to make people hate them more.

The entire season comes down to a best-of-three series now.