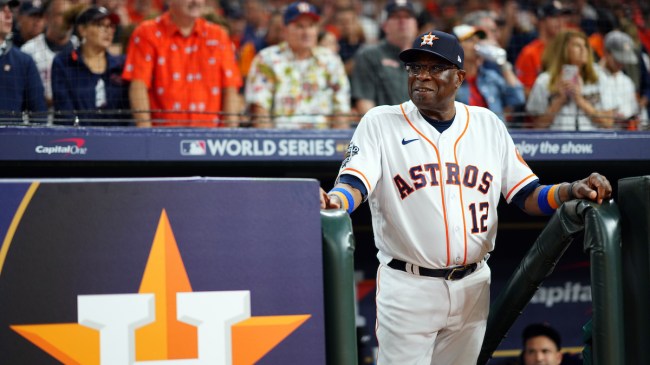 The Houston Astros are big betting favorites to win the 2022 World Series, but manager Dusty Baker has given baseball fans a reason to root against them.

The Astros are undefeated in the postseason after sweeping the New York Yankees to advance past the ALCS. Their opponents, the Philadelphia Phillies, are on a bit of a dark horse run having defeated the St. Louis Cardinals, Atlanta Braves, and San Diego Padres.

Ahead of Game 1 of the World Series on Friday, Houston manager Dusty Baker shared how several friends had wished him and the Astros luck over the past week. He named Snoop Dogg as one, but the real curveball was Bill Cosby.

Dusty Baker says this week he has heard from “my homeboys and homegirls,” some former coaches, Snoop Dogg and Bill Cosby. An eclectic group, to say the least.

Some former coaches, Snoop Dogg, and who?!? That’s the reaction much of the internet had to Baker’s comments. The decision was baffling for MLB fans given Cosby’s well-publicized downfall.

The disgraced actor and comedian had been accused by 50+ women of sexual assault and misconduct before he was found guilty of aggravated indecent assault in 2018. The conviction was later overturned in 2021, but his image remains tarnished.

So fans were understandably confused as to why Baker would publicly mention his apparent friendship with Cosby.

man I would not be bragging about Bill Cosby having my phone number in 2022 https://t.co/E9pQ4DG7Ai

Despite plenty of baseball fans still holding resentment over the Astros’ sign-stealing scandal, everyone generally liked Baker. That’s changing after his recent comments.

Just when everyone agrees Dusty Baker is a good dude, he casually throws out being friends to with Bill Cosby. In 2022.

If fans weren’t rooting for the Phillies before, they certainly are now.

The Astros went on to lose Game 1 of the World Series in extra innings after blowing a 5-0 lead. Fans were quick to suggest it was potential karma and did not hold back with the jokes.

The Astros will look to bounce back in Game 2 on Saturday. It’s also probably best if Baker doesn’t mention his friendships anymore.