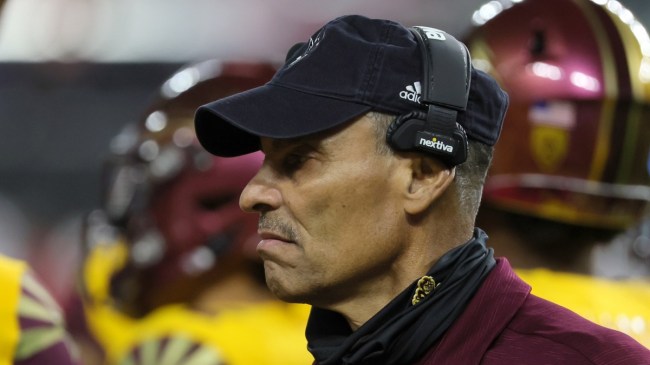 Things have not been going well in the Arizona State football program for quite some time. The team has been getting worse, they’ve been levied with an NCAA investigation into recruiting improprieties, and that has hamstrung recruiting. This led to head coach Herm Edwards’ firing over the weekend.

But, new reports are coming out about just how bad the situation was in Tempe. There may have been more going on than just bad players and bad execution on the field.

According to a report from Saturday Out West, Sun Devil staffers were leaking gameplan information to opponents to in an attempt to get Edwards fired quicker.

That is a truly wild development. There’s not much worse that can happen in sports than people in your organization leaking sensitive information to the opponent. It is a serious breach of trust and shows just how broken the entire football program was.

Naturally, this report has made huge waves in the college football world.

This guy smartly does a play on Edwards’ famous “You Play to Win The Game” Speech.

That’s sad because you play to win the game

Mostly, there’s not a lot of sympathy for Edwards. Many think he ran that program into the ground and should’ve been gone before this year.

Can’t blame them. Everybody knows he should’ve been done after last season.

This definitely hurts the possibility of someone good taking the job. It shows the rot at Arizona State goes through the whole program.

No in-demand CFB coach is going to touch ASU. Their best bet will be an ambitious lower level HC willing to assume the risk of NCAA penalties+fractured environment

But, I’m sure more details will come out in the near future and we will know what truly happened.